The Wide Angle: Bat and a ball and a fool’s errand

For the last few years, Rocky Hulne and myself have been toying with the idea of taking on high school or college athletes in the sports they compete in as a running feature — either video or text or both.

It’s not an old idea by any stretch. For example, Rocky might take on an Austin boys basketball player in a quick game of one-on-one or I would face a high school softball pitcher.

These efforts would be maximum, or at least as maximum as our out-of-shape bodies would allow. Neither of us had any illusions how each challenge would end and it would include probably a lot of trash talk when we saw these athletes next, but in the end it would be a different kind of feature.

Even though we understand the end results, it didn’t stop me from opening my big mouth. At the time, when we first started talking about this, I boasted that I could face one of the area’s top pitchers — Blooming Prairie’s Shelby Swenson.

Rocky of course laughed. Any other time I might have laughed with him, rather than voice continued argument in the face of his mirth.

It wasn’t complete bluster and I had a little bit of history on my side. I am good friends with a woman who was a pitcher in high school and college and she was very good. However, during her time at Huron University I got the chance to take some cuts. Sure, she made me look like an absolute fool, but I got my quality swings and I tagged a few.

I felt confident that if hitting a college pitcher was possible, how hard would a high school pitcher be?

This was before Swenson led BP to a state title, but still I never recanted my boasts. Now to be fair, Swenson — to my knowledge — never knew of this plan, nor did her coach Ali Mach. Or maybe they both knew and like the good people of Blooming Prairie chose not to make me feel better.

I think they would have agreed to said challenge though and I remain confident that after a while of Swenson making me look silly, I would find a pitch at some point.

Rocky and I were at the University of Minnesota covering the No. 4-ranked Golden Gophers as they played Iowa in the final game of the three-game series.

We weren’t there strictly for the Gophers as Hayfield grad Dani Wagner is the team’s starting centerfielder.

Just before we got to the stadium, my mouth started running again. 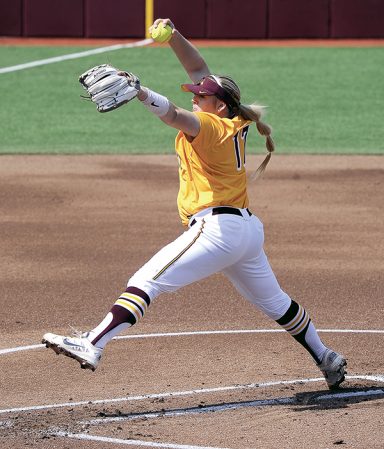 The Minnesota Gophers’ Sara Groenewegen pitching against Iowa. Can we all just agree I probably wouldn’t do well?
Eric Johnson/photodesk@austindailyherald.com

“Hey, maybe we should try to line something up where I try to hit off Groenewegen,” I proposed.

“Sure, and then we can line up the team to laugh at you,” Rocky said, or something to that effect. I know the team lining up to laugh at me was prevalent.

He of course expressed the continued doubt that I can hit off fastpitch softball pitchers in general. I considered it for a moment — could I really hit off Sara Groenewegen, one of the best pitchers in the nation with an ERA of .52?

The easy answer is no — no, I could not. Especially after witnessing Sunday’s game.

Softball pitchers, first and foremost, bring into question the very law of physics themselves. They’ve got fastballs of course and what makes them particularly daunting is the speeds they come in at such a short distance.

At one point in Sunday’s game, Groenewegen drilled an Iowa batter and I swear I felt pain.

After fastballs, though, physics really breaks down. Change-ups appear to slow the very nature of time down, curveballs warp the fabric of time and rise balls — seriously, what are rise balls? They are unnatural.

It took me approximately two innings (at least one inning of foolishly trying to convince myself I would even touch the ball) to realize that A) I would not touch Groenewegen and B) the team would indeed be rolling.

I might not even be let back into the stadium. I would be an embarassment to the sport only because there really is no chance of hitting off Groenewegen. Just the very idea such a thing would be set up is the embarassment.

Still, I have to ask myself, would I turn down the chance trying to hit off Groenewegen if coach Jessica Allster realized the team was depressed and needed a pick-me-up? Probably, if for no other reason than to say I at least took up the challenge despite the idea of rolling around on the ground wailing if she hit me. I have no pride really.

And how would I handled it if I did miraculously put bat to ball, or even, should the planets align and I do get a hit off her — do I run the bases in an effort to fully challenge myself in the face of far superior athletes?

More importantly, how would I handle an entire Big Ten team rolling on the ground laughing at me and would Wagner, because she’s from my area, show the grace of Hayfield and at least stand to laugh at me?

All questions that could be answered if the Gophers had nothing better to do with their time, which I suspect they do. They have titles to chase, not afternoons of entertaining a boistrous photographer who one time in the very early 2000s got a few hits off a college pitcher.

And yes, who am I fooling — Hayfield would laugh at me.

The Wide Angle: I really don’t know what I’m doing 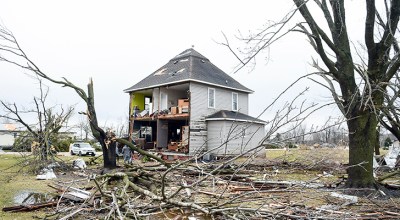 Cumin and cinnamon: a world of difference when it comes to pie