‘The first person that looked like me’  For these musicians, Prince still reigns 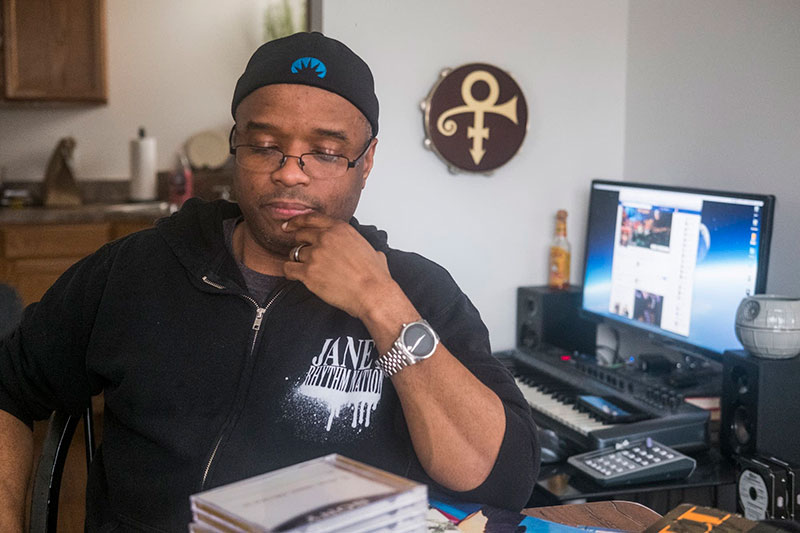 Terry Gray recounts the moment he learned of Prince’s death in front of the desk where he was working inside his Woodbury home on April 12. Evan Frost/MPR News

Although Prince’s death had a profound impact on fans of all racial backgrounds, for some black Minnesotans his loss was especially meaningful.

Here are the stories of two of them.

‘He was so unapologetic’

Brynne Crockett, 26, was born in north Minneapolis. She’s been rhyming since she was 8. Today she’s a hip-hop artist, known in the local music scene as BdotCroc. In a freestyle rap, she describes herself as “living in a basement of royalty, known as the Prince.”

That is not just a lyric. She actually lives in the basement where Prince lived as a teenager. She and her family moved into the former home of Prince’s grandmother more than 10 years ago, when Crockett was still in high school.

At the time, she wasn’t a big Prince fan. And she didn’t much care for the basement where her room would be.

“We came down here, and my mom was like, ‘This is a really special basement,’ and I’m looking at it like, ‘It’s dry wall, cement floor, nothing special about down here,’” she recalled, laughing.

When she traveled, people would ask her where she was from. When they heard she was from Minnesota, they would reply with a single reference point: Prince.

“The closest thing I got to Prince was at a basketball game,” she admitted. “The Lynx were in the championship, and I heard he was there in a suite or something.

“Prince was like a ghost, so I’ve never seen him.”

Her first memories of Prince’s music take her back to her childhood, when she skated to his tunes at a roller rink. She completely tuned out her mother’s lectures about the basement and those historic jam sessions that Prince had with his childhood best friend, Andre Cymone, and his pal Morris Day. The two later became Prince’s first bandmates in the late 1970s.

When Prince died, something curious happened. Flowers started showing up at her family’s home, on their front porch, in front of her basement door. The family was suddenly inundated with media requests. CNN called. Film crews wanted to tour the basement. International fans wanted to see the space where Prince created his “Minneapolis sound.”

It was touching, but Crockett feared coming home to emotional Prince fans. “I don’t want to come downstairs in my room, and see nobody rolling on the floor, like trying to absorb the purpleness or something,” Crockett said. “It’s an amazing thing, but it was stressful for my mother and for myself.”

After the media frenzy, Crockett looked up more of Prince’s story. That’s when she discovered his social activism, his political songs, his androgynous style, his battles with corporate music giants and his influence on young artists.

“The thing I loved about him the most, that I really identify with, is how he was so unapologetic,” she said. “He did not care, really, what people’s idea of normal was, and how he should be, what he should do. He was very bold, in his music and in his statements, and he was so serious about his craft.

“So for me, I think I’ve just adopted that attitude. This is my art. I’m going to do with it what I want, and give it to the people, and let the people make that decision for me. Not companies, not people’s ideology of what a female emcee should be. Because he didn’t allow himself to be put into any box.”

Terry Gray, 47, born and raised on the east side of St. Paul, describes himself as a “huge Prince fan.”

“He was the first person that kind of looked like me, that was brown, that was playing a really loud guitar,” he said. “I wanted to be him.”

Gray recalled a time in the Twin Cities when it was hard to find music by black people on the radio.

“Growing up here in the Twin Cities, there really wasn’t black radio,” he said. “We had KMOJ, that you could get if you were like three blocks away from it, in Minneapolis. I was always on the east side of St. Paul, or in the heart of St. Paul, and we couldn’t get KMOJ, so back then our radio was all white. So I grew up with white artists.”

“He was the first person that was doing something similar to the folks that I had heard” in other places, Gray said. “And he was brown, or ‘mocha brown,’ as he used to say.”

Because he couldn’t follow the path of his black guitar hero, Gray chose the next best thing: recording and producing. He is now an Emmy-award audio engineer at tpt, the Twin Cities public TV station.

Still, he followed Prince’s career, and saw him up close at Paisley Park.

“It was one of those dance-party deals,” he recalled. “And I happened to be standing in the hallway. And he had this door, that was in a wall. You didn’t know that was a door! … I turned around, and there he was.

“My first initial impression — I’m short, but I’m like, ‘This dude is really short.’ But then when he got on stage, he might as well have been 10,000 feet tall. Because that’s the swagger, and the chops, the skills, and everything that went into that package.”

Many artists Gray loved died last year, including David Bowie. But nothing compared to the death of Prince.

“He wasn’t family, but he felt like he was. … Because he was always there. I find myself, all the time, saying, ‘Damn, I miss you.’ I really miss that dude, like he was a brother or something.

“Prince died. Prince died. That guy is gone. I must have said that for two weeks. And because we’re coming up on the anniversary of his death, it’s hard, because I’m reliving that day.”

A year later, Gray still finds it hard to imagine that he lives in a world without Prince.