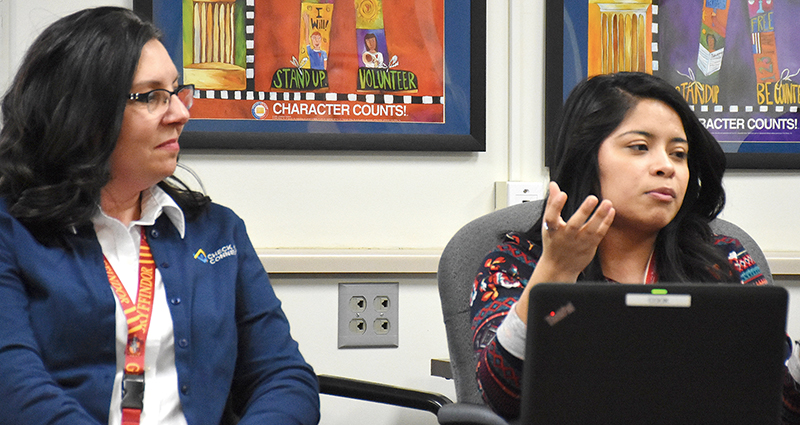 Sumner became the first Austin school to enact Check & Connect, a program begun at the University of Minnesota in 1990.

It is designed to work closely with students and connect with families to ensure students have a good school experience, and are on a course toward graduation.

The success rate is clear: There has been an overwhelming decrease in behavioral issues; a 78 percent increase in reading levels; and a 54 percent increase in the Dynamic Indicators of Basic Early Literacy Skills (DIBELS), a program that assesses and tracks a young student’s progress.

“We can’t change kids’ situations, but we can problem-solve” issues that might prevent students from coming to school, or being comfortable once they are there, Berger said.

In addition to Cook, Berger and Ramirez, others who help guide the program are success coach Santino Deng and social worker Maureen Noterman.

Together, the team has identified students needing the support. Coaches meet with students for 20 minutes a week to get to know the students, hear their concerns and  help students find solutions to issues. Cook connects with family once a week so family members, who are often from another culture, are comfortable talking with school personnel and understand a student’s needs.

The family piece of the program is important; some may not have had children in the American education system before; or, some family members may not have had a good experience in school, or do not understand the importance of regular attendance.

“It has been eye-opening,” Cook said.

She spoke of one parent, for instance, who did not want to come to a student conference. The mother did not know what questions to ask and felt uncomfortable coming by herself. Cook spoke with her several times and even met the mother at the door of the school so that she would not attend the conference alone. The impact on the student was significant and was proud to have her mother there.

Some students have a difficult time getting to school, or even knowing how to catch a bus. Coaches show how to set alarms on cell phones or alarm clocks; they may walk with the student to the corner on which the student can catch a bus.

Berger said reasons are clear for early interventions: Students who do not graduate are twice as likely to live in poverty and eight times more likely to spend time in jail or prison. Forty percent of those who do not earn a diploma will require government assistance.

Board members were clearly taken with the results.

“This is excellent; it’s great,” said board member Don Fox.

Kathy Green wondered about the other challenges to achievement, such as learning disabilities and developmental delays. Those, said Berger “are easy to detect,” but said other factors were at times “really soft.” Berger also said the connection between preschool and a child’s education experience was “very, very important.”

Superintendent Dave Krenz outlined the scope of demographics in students; he noted that 30 percent of Austin graduates do not start school in Austin. In January and February, there were 70 new students who registered for the first time in the district, many of them refugees. Six of those students had never attended school before, he said.