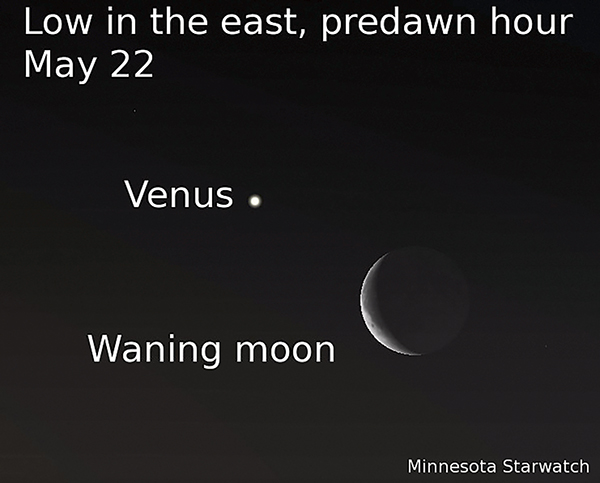 Saturn has been moving toward center stage as much speedier Earth gains on the ringed planet.

In May Saturn starts rising before midnight. It first appears low in the southeast, to the left of the red star Antares in Scorpius; by dawn Saturn and Antares have moved to the south or southwest.

The lovely Teapot of Sagittarius follows Saturn into the sky. As the night wears on and morning approaches, the Teapot rotates, tipping its spout as if to pour its contents on the tail of Scorpius. The Teapot is highest in the sky around 3 a.m.; look just below and slightly east of Saturn. In June Earth will overtake Saturn in the orbital race, and the planet will be up all night.

Jupiter comes out in the east at nightfall, outshining the stars. The king of planets’ nearest bright neighbor is Spica, the lone standout in Virgo, the maiden. On the night of the 7th-8th, a waxing moon accompanies Jupiter and Spica on their journey across the night sky. Above them shines Arcturus, the brightest star in Bootes, the herdsman.

Facing south after the sky has darkened, you can see spring constellations like Virgo and Leo (immediately west of Virgo) front and center, and summer constellations like Bootes; Corona Borealis, the northern crown; and Hercules moving in from the east. If you like a challenge, get a star chart and try to trace the sinuous line of stars in Hydra, the sea serpent, slithering below Leo and Virgo.

Venus is now a morning star, shining low above the eastern horizon just before dawn. Our brilliant sister planet climbs throughout the month, pursued by the surging spring sun. The later the date, the earlier you’ll have to go out to catch it before the sky gets too light. Try not to miss Venus on the 22nd, when an old crescent moon pays a visit.

May’s full “flower moon” rises the evening of the 10th. Its other names include the full corn planting moon and the milk moon. As it wanes, the moon visits Saturn and its neighbors. It travels the night sky above Antares the night of the 11th-12th and close to Saturn on the 13th-14th. In the morning hours of the 15th, it hovers close above the bowl of the Teaspoon, which itself hangs over the handle of the Teapot of Sagittarius. During the next several nights, the shrinking moon passes under the Summer Triangle of bright stars as it makes a beeline for Venus.