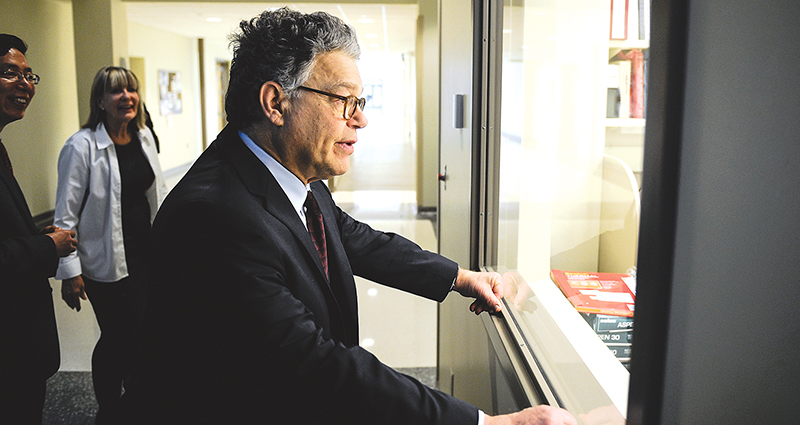 Sen. Al Franken looks in to one of the labs at The Hormel Institute during a visit Wednesday afternoon. Photos by Eric JOhnson/photodesk@austindailyherald.com

“The president is proposing a large cut in [National Institute of Health] funding,” Franken said.

The visit came as part of Franken’s visits to what he called the “research triangle,” which included a visit to Rochester on Tuesday along with visits to Austin and the Twin Cities.

Much of the research conducted at The Hormel Institute is funded by NIH grants, and Institute Executive Director Dr. Zigong Dong said the proposed cuts would be “damaging.”

“The reason [the United States] is so advanced is because of research,” he said.

“For the first time in recent years, the cancer mortality rate has gone down,” she said.

Prior to the meeting, Franken toured the Hormel Institute’s expansion, which was completed last year, with Dong and Dennison. Franken called The Institute’s research “cutting edge” and the new extension “beautiful.” 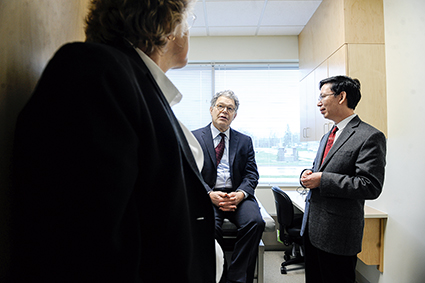 Sen. Al Franken talks with The Hormel Institute’s Dr. Ann Bode and executive director Dr. Zigang Dong from one of the new examination rooms during a visit Wednesday afternoon.

Franken also addressed concerns from community leaders like City Administrator Craig Clark during the meeting, with topics ranging from public housing to education.

“The city of Austin has received $9.3 million in funding over the past six years,” Clark said. “Those funds were used to build things like the flood wall, road projects, DWI enforcement and the Community Development Block Grant for redeveloping homes.”

Julie Ackland, Section 8 specialist for the Austin Housing and Redevelopment Authority, spoke of the importance of providing housing for the homeless and mentally ill, arguing it saves money by keeping them out of jail.

“Cutting program funding would prevent many people from paying their rent,” she said.

“If we get cut, it will affect our ability to treat and prevent addiction,” she said.

According to Riverland Community College Dean of Students Gary Schindler, 55 percent of Riverland students rely on the Pell Grant for education, which is also facing cuts under President Donald Trump’s budget proposal.

Austin Public Schools Superintendent David Krenz told Franken that 35 percent of students receive English language services and that proposed cuts could result in the loss of up to 20 EL positions.

“The school district would be devastated,” he said.

“We know how important agriculture is here,” Franken said, citing how agricultural research is tied to Hormel Foods Corp. “Those are cuts that are being proposed that we don’t like in Congress.”

Franken remains optimistic that there is enough bipartisan support to defeat the budget.

“This is not about Republicans versus Democrats,” he said. “These cuts have bipartisan opposition in Congress. I believe once this budget comes to a vote in Congress, it will be dead on arrival.”