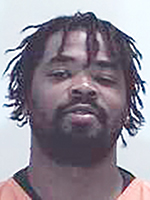 One of three adults convicted in a large-scale fight at Austin High School in September 2015 will serve prison time.

Odell Dorrea McCullough, 28, was sentenced Tuesday in Mower County District Court to 46 months — or about three years and nine months — in prison for felony third-degree drug sale of a narcotic charge.

He received credit for 226 days served.

McCullough acted as a middle man in selling drugs to a confidential informant in May 2016.

The informant bought 0.44 grams of heroin from McCullough near apartments by Austin High School, which the informant turned over to an Austin Police Department officer, according to court records.

For the AHS fight, McCullough was sentenced to five years supervised probation in March for one count of felony second-degree riot with a dangerous weapon.

That fight broke out around 3:15 p.m. on Sept. 28, 2015, outside the high school doors and continued in the gym lobby, according to court records.

The “large-scale fight” included dozens of people brawling in the street outside the high school and repeated acts of violence, while onlookers took video and encouraged the participants to fight, according to court documents.

McCullough was caught on video striking people with nunchuks.

Since the fight, he’s been convicted of careless driving and two DWIs, both gross misdemeanors.