Into the woods: Duren, Wood finalists for Midwest Book Award for their book ‘Essence of Place’ 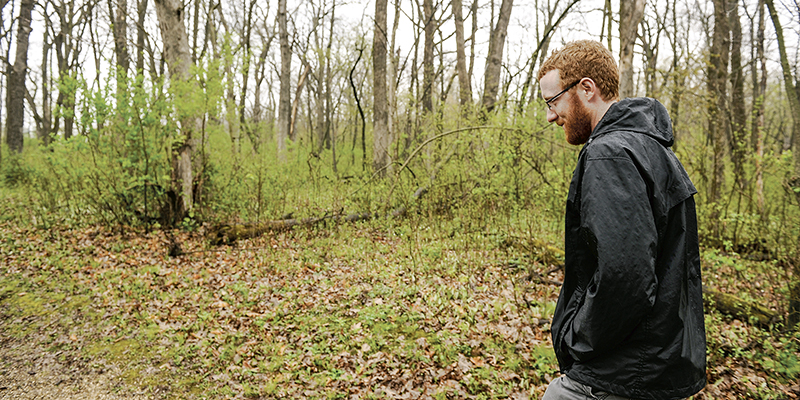 John Duren walks through the nature center where he’s captured so many captivating images. Eric Johnson/photodesk@austindailyherald.com

“A real woods is a feeling, a fragrance, a cool shade on a hot day, shafts of sunlight through a green arched ceiling, the hoot of a barred owl or the song of a cardinal, the crash of a stag through the shadows.”

— Doug Wood, from “The Essence of Place/The Story of the Jay C. Hormel Nature Center

Austin photographer John Duren is a man who likes to tell the story no one else knows — and he can think of little else that gives him as much pleasure as putting the Jay C. Hormel Nature Center under the regional spotlight.

“We are so lucky to have it (nature center) here,” he reflected, sitting near the stone fireplace in the newly-opened interpretive center, a gentle rain falling outside.

“Austin is near and dear to my heart — I just love this place,” he added. 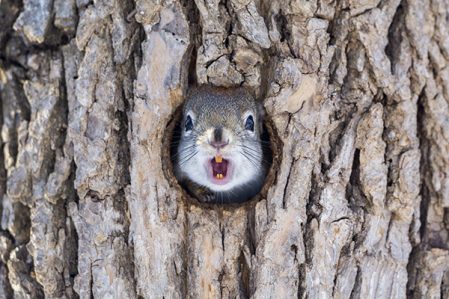 A squirrel strikes a comical pose out of a burrow. Photo by John Duren

He will get his wish of putting Austin in the public forefront: His book of photographs, produced with writer Doug Wood, entitled “The Essence of Place: The Story of the Jay C. Hormel Nature Center” is a finalist in the 2016 Midwest Book Award competition.

“When you work so hard and for so long — you have an idea and you see it grow, it’s pretty special,” he said.

The best part, though, is that the nature center is paid tribute.

“It’s a testament to the plan of Jay C. and the staff of the center, to all of their work” that is doubly special, he said. “It is a book about 500 acres of southern Minnesota; it’s cool to see it receive the recognition it deserves.”

The book is a visual love letter to one of his favorite places. He said his early memories were of walking its trails with his mom and dad, Cathy and Tim, and older brother Brian. Duren said he recalled seeing his first wildlife, a white-tailed deer, while on the grounds.

“I can also remember taking classes with (former director) Larry Dolphin,” he added. “I spent a lot of time here.”

The idea of a book grew with his many trips into the woods. The Hormel Foundation Chairman Gary Ray encouraged him to pursue the book; and Friends of the Library and the Foundation provided support for the publication and he contacted Doug Wood to write the book’s text. Wood, an author and musician, was well-known for his many appearances at the center. Duren said he never considered anyone else.

Duren began a 15-month journey through the center’s grounds, returning time after time for shots.

Although he believed he knew the land, he found out that after the book was completed, “I knew every inch,” he said with a chuckle.

The book intends to do just what its title says: Find the essence of the nature center. Photographs include myriad perspectives, from seasonal landscapes to close-ups and long-range wildlife shots. Deer, birds, insects and water fowl are all caught amid the beautiful grounds. Some photographs pay tribute to staff, especially former director Dolphin, seen in a number of pursuits. Children are also captured in a number of activities: cross country skiing, hiking, or filtering apple cider. Dolphin is seen banding birds. Other photographs were taken from a small plane, showing the center in a birds-eye view, giving the area “a much broader perspective.” The book opens with a history of Jay C. Hormel’s vision of populating the area with trees, and creating an arboretum. 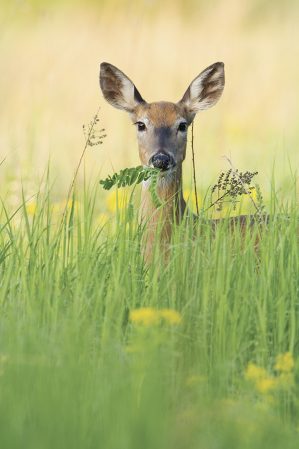 Among the many images Duren has captured at the nature center was this deer peeking up out of the tall grass. Photo by John Duren

Duren said the book’s photographs required both patience and persistence.

“You can have perfect conditions, perfect light — but sometimes, you can’t get the shot,” he said. “Sometimes, it is a test of patience.”

Still, it is a labor he clearly loves.

“I like small places; I like to put in the time; I like the grind of going out two, three weeks, maybe a month, to get that one shot.”

When asked about his favorite photograph in the book, he did not hesitate. While he knew coyotes were in the area, he had only seen one other in his life; to capture the animal photographically would be something he had never been able to do. 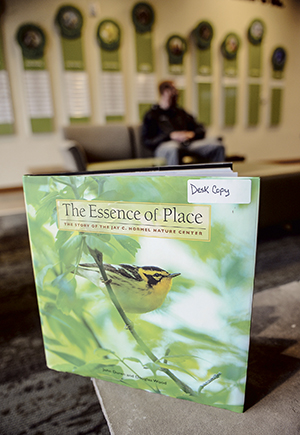 “The Essence of Place: The Story of the Jay C. Hormel Nature Center.”

“I’d caught glimpses of this guy five days in a row,” he said. He finally went back to settle in the area where he had seen the coyote travel.

“He came right at me; it was the coolest experience,” Duren said. “He just looked at me, trying to see what I was all about.”

Duren writes about his experience with the coyote — and other animals and insects — in the latter part of the book, a kind of “How I Did It.” It is not meant to impress as it is to illuminate the stories behind the photos — sometimes humorous, when you read about Duren lugging a too-heavy ladder around the grounds and realizing later he could have used a much lighter version; or heart-pounding, when he finally finds “the ghost,” as he calls the coyote whose image he finally captures.

You wonder, from seeing the photographs, if Duren himself is not an extension of the center, so willing are the animals to give him his due. One doe is seen munching on vegetation while looking directly at the camera; a fox looks as if he is smiling at Duren. A squirrel, in his tree cavity, peers out from his home, with what appears to be a look of surprise.

Duren has also photographed Yellowstone National Park — an experience that was good, he said, but after all was said and done, he realized he liked better the idea of revealing new places and new perspectives. Most national parks, he realized, have been photographed from just about every possible angle.

The essence of his own place, the place in which he feels most comfortable, seems to be in this neck of the woods.

“Every time I head out on the trail, there is the possibility for the marvelous,” he says in his notes in the book. “This possibility is what drives me. I want to see those things. I want to experience them. Most of all, I want to photograph them.” 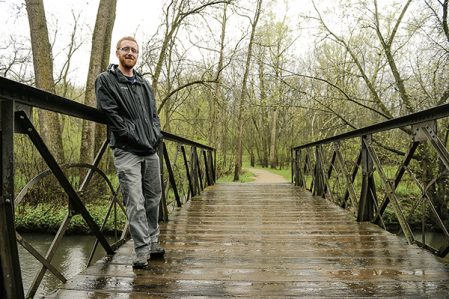 The Wide Angle: Bat and a ball and a…