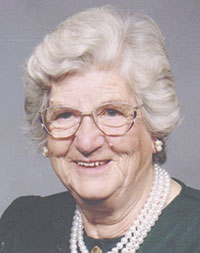 “Juanita” was born June 22, 1921, in Indianapolis, Indiana, to Claude and Edna (Nasers) Weaver, the third of 10 children. On Sept. 12, 1943, she was united in marriage to Norman Wright. They lived in Grand Meadow all their lives, except from 1946-1949 when they lived in Ward Hill, Massachusetts. Juanita and Norman were blessed with five children. She was a helpmate to her husband Norman, farming in Grand Meadow.  In addition to raising her five children, she also worked at Farmer’s Produce in Grand Meadow and Libby’s in Rochester, Minnesota. She greatly enjoyed spending time with family, playing cards, especially 500, raising a large garden, crocheting, and raising many dogs in her kennels.

Juanita was preceded in death by her husband, Norman, in 1986; brothers, Virgil, Ernest, and Harold; and sisters, Bernice and Betty.

Online condolences may be left at www.hindtfuneralhomes.com