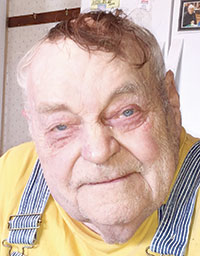 He was born on Sept. 11, 1931, in Fairmont, Minnesota, the son of Ray and Esther (Bremmer) Kruger. He grew up in Fairmont and then moved with his family to Oakland, Minnesota, where he attended school. In 1952, Harold was drafted into the U.S. Army. After his discharge, he returned to the Oakland area to farm with his dad and work various jobs in the Albert Lea area. In 1965, he became self-employed as the founder of Kruger Implement where he sold antique farm equipment. On July 24, 1986, Harold was united in marriage to Charlene Crews. He was a member of Oakland Lutheran Church. Harold loved antique John Deere equipment, tractor pulls, snowmobiling, and card and board games with family, and looked forward to playing with and singing to his grandchildren every night.

Harold is survived by his wife Charlene; son, Harlan (Amanda) Kruger; grandchildren, Heidi and Jackson Kruger; six step-children; many step-grandchildren and step-great-grandchildren; sisters, Lavonne Froiland and Lois Chapek; and many nieces and nephews.

Harold was preceded in death by his parents; siblings, Doloris (Wayne), Helen (Frank), and Bill (Genevive); and brothers-in-law, Art Chapek and Kermit Froiland.

Bayview/Freeborn Funeral Home is in charge of arrangements. Online condolences are welcome at www.bayviewfuneral.com.