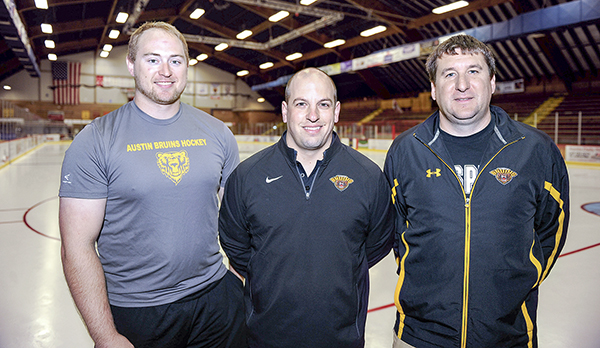 The Austin Bruins announced Friday that Kyle Grabowski will not return as head coach/general manager for the 2017-18 season.

Grabowski had served as the head coach of the Bruins for two seasons, becoming the second head coach in team history after being hired to replace first coach Chris Tok in 2015.

The Bruins finished the 2015-16 season 29-27-4, the No. 3 seed in the Central Division. After upsetting No. 2 Minot in four games, the Bruins fell one win short of their third consecutive Robertson Cup Tournament appearance, dropping the Central Finals to Bismarck in five games.

This past season, the Bruins struggled to find consistency (24-27-9), finishing in sixth place and missing the playoffs for the first time since the team’s inaugural season of 2010-11.

The team finished the year strong by picking up points in the final seven games; but, the team had a rough second half overall, losing 19 of 25 games in the months of January, February and March.

The Bruins will retain assistant coaches Keenan Kelly and Brad Clayton as they interview candidates to fill the head coaching job.

The Bruins thanked Grabowski for his hard work and dedication over the past two years.