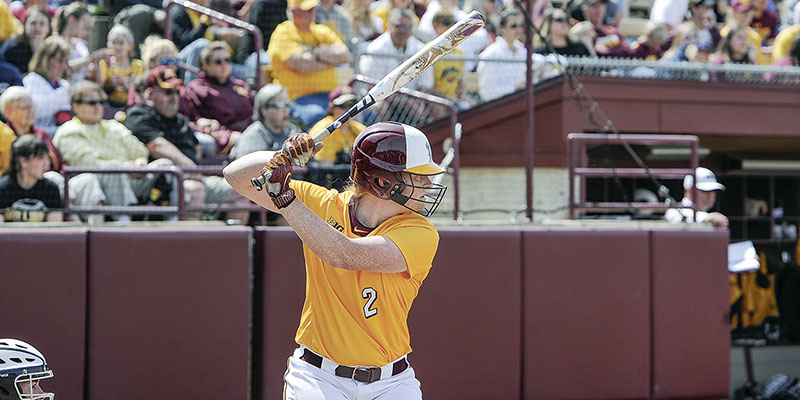 MINNEAPOLIS — It’s been a golden spring for the University of Minnesota softball team as the program has reached new heights this season and Hayfield grad Dani Wagner is also taking her game to new levels.

After playing most of her first two seasons as a defensive specialist for Minnesota, Wagner, who graduated from Hayfield in 2014, is no longer fazed by the bright lights of Minneapolis. She has found her hitting stroke for the No. 4-ranked Golden Gophers (45-3 overall) who swept North Dakota State University Wednesday night after scoring a three-game sweep of Iowa over the weekend. 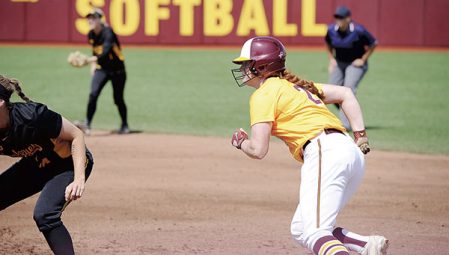 The Minnesota Gophers Dani Wagner leads off first against Iowa in the third game of a three-game series at Jane Sage Cowles Stadium at the University of Minnesota. Eric Johnson/photodesk@austindailyherald.com

“I think it’s just been my mentality and keeping my confidence up,” Wagner said. “Everyone on the team and the coaches have told me that I can do it and that’s what I’ve been focusing on.”

Wagner went hitless last season and she was 5-for-25 at the plate in her career before this season. She is currently hitting .317 with five homers, five doubles, three triples, and 24 RBIs.

Wagner was playing shortstop in the past two seasons but has been the squad’s every day center fielder this season. 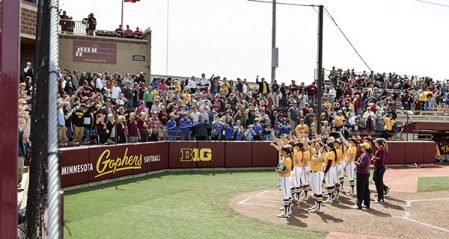 The Minnesota Gophers, including Hayfield graduate Dani Wagner sing to the Minnesota faithful after defeating Iowa Sunday in Jane Sage Cowles Stadium at the University of Minnesota. Eric Johnson/photodesk@austindailyherald.com

“She’s having the best year offensively that she’s had. She’s always been a great defensive player for us and we’ve got a pretty good offensive lineup, and it’s hard to break through,” Allister said. “She had an opportunity this year and she’s run with it. When people talk about offensive surprises this year, I think her story is at the top of the list.”

As Wagner has emerged this season, she’s gained a lot of respect from her coaches and teammates alike.

One of her bigger supporters has been one of her former opponents.

Minnesota senior left fielder Sam Macken now lines up next to Wagner on game days, but the two used to square off as HVL opponents when Wagner was playing for the Vikings and Macken was playing for Rochester Lourdes. 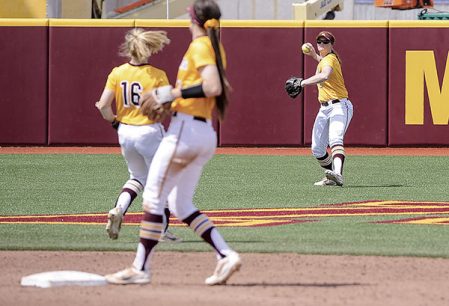 Dani Wagner relays a throw back into Gophers shortstop Allie Arneson against Iowa Sunday in the third game of a three-game series at Jane Sage Cowles Stadium at the University of Minnesota. Eric Johnson/photodesk@austindailyherald.com

“I knew who she was. I never really got to talk her or really wanted to because we were kind of rivals, but I’m happy I’ve gotten to know her [at Minnesota]. She’s a great teammate, a great player and she’s been really helpful for this team,” said Macken, who is hitting .321 this season. “I think Dani has gotten way better this year. She’s feeling more comfortable and she’s been a confident player overall.”

Wagner found her hitting stroke at the right time for the Gophers. The team is loaded with impact players in its freshman class. Freshman catcher Kendyl Lindaman, who is from Ankeny, Iowa, has the school single season record, picking up her 16th homer against NDSU Wednesday and freshman MaKenna Partain, who is from Banks, Oregon, is hitting .400. 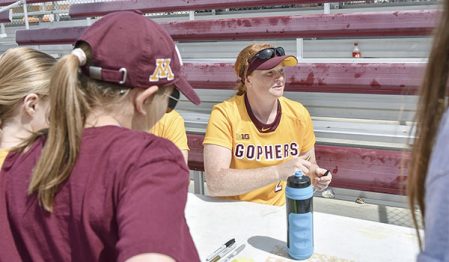 Dani Wagner prepares to sign autographs after the No. 4-ranked Minnesota Gophers defeated Iowa Sunday in at Jane Sage Cowles Stadium at the University of Minnesota. Eric Johnson/photodesk@austindailyherald.com

“It’s been unreal how well everyone’s hitting,” Wagner said. “You don’t always expect freshmen to come in and be off the charts, but we got lucky with a couple of those and everything’s been clicking. Our goals are definitely high right now and we’re doing really well at achieving those goals. We just want to keep it going right now.”

Minnesota also has the one of the top pitchers in the nation in Sara Groenewegen, a senior from White Rock, British Columbia in Canada, who is 23-2 overall with a 0.54 ERA, ranking her third in the NCAA as of Wednesday.

The Gophers are currently 16-1 in the Big Ten, leading Michigan by two games with six conference games remaining until the Big Ten tournament begins on May 11.

The NCAA Regional tournament begins May 19. 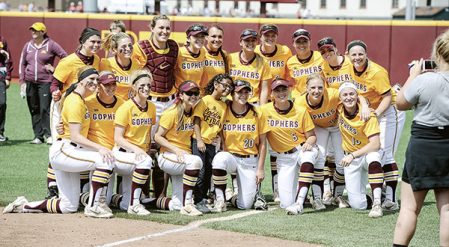 Dani Wagner with the rest of the Gophers softball team pose for a team picture. Eric Johnson/photodesk@austindailyherald.com