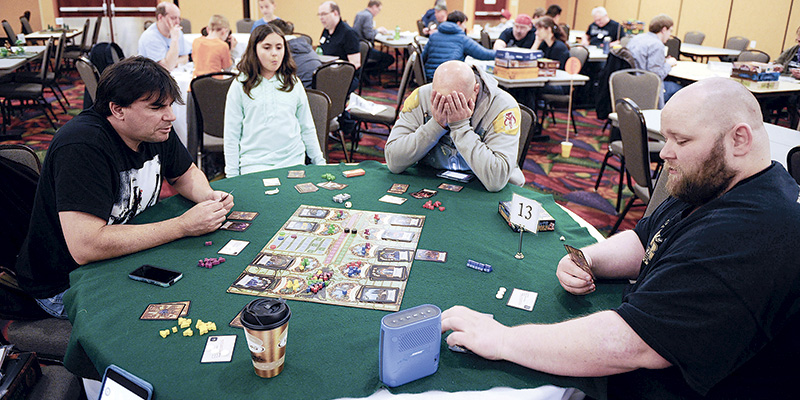 Cyrus Kirby puts his head in his hands as he loses the advantage during a game of “A Study in Emerald” during the second day of Austi-Con at the Holiday Inn and Convention Center last year. Herald file photo

War is coming to Austin.

To be more specific: The Vietnam War is coming to Austin in May, but it’s coming in an alt-history form with the rules of “Savage Worlds” and “Tour of Darkness.” And it will all take place on a table.

Austin’s Michael Jordal and his wife, Kate, formed the festival last year as a way to bring people together to enjoy the world of tabletop gaming. And if one thing was apparent last year, it’s that tabletop gaming offers a vast world that’s open to creativity and camaraderie.

Jordal described the event as “a lot of good people getting together just to have fun and share their hobby with everyone.”

The Vietnam-era game is coming in the form of a skirmish game with 28-millimeter historical miniatures made by Dave Allen. The games will be called “Stop! Hey, What’s That Sound” and “Feel Like I’m Fixing to Die!”

“He’s put a lot of work into designing all the stuff for it,” Jordal said of Allen.

Jordal discovered tabletop gaming as a child, enjoying traditional card games before he started playing “Magic the Gathering” and “Warhammer” in high school and later other games like “Settlers of Catan.”

He’s enjoyed getting to share that passion for tabletop gaming with friends and the community.

“It is a lot of fun for people from all over to get together and play these games” Jordal said in a press release.

Jordal also enjoys the unique opportunities of a gaming weekend. It offers some unique opportunities to play games designed by some area players. Don Zimmerman of Rochester will host his game “Godzilla: Monsters Attack!,” a military cooperative game where players must drive rampaging kaiju out of Japan. 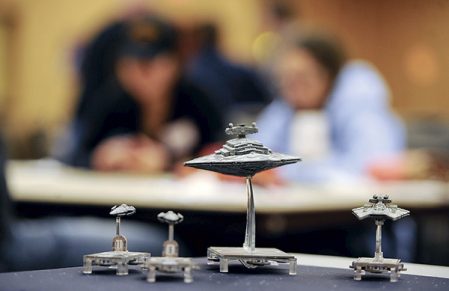 The game boards will be ready. Herald file photo

As the Austin-Con website, notes: “This local favorite” is “not available anywhere else,” something Jordal enjoys about Austi-Con.

The games can range from the simple to the elaborate, from easy to complex. Like Allen’s Vietnam-era game, games were utilized at last year’s Austin-Con that were almost entirely built by a player and shared. Others were simply taken straight from the box and played at tables.

Last year, Jordal welcomed 196 gamers to the first Austi-Con, and positive feedback from participants gave him the drive to continue. He’s expecting close to 250 this year.

People don’t need to be avid or experienced tabletop game players to attend, as Jordal described the gaming community as welcoming and open to new players, and games range in complexity and difficulty.

“Overall, I think it’s very positive,” Jordal said. “A lot of people there are very enthusiastic about gaming.”

Game types will include board games, card games, miniatures and role-playing games, and there will be a few seminars. Matt Woden of Twin Cities-based Matt Woden Games will give a seminar on board game design, as he’s designed board games.

The Austin Armory will give Austi-Con a bit more space, with the main gymnasium/drill floor lined up for gaming along with a classroom and seminar room for additional games and events.

Austin Rotaract members will be on hand to sell meals around meal times as a fundraiser, and snacks will be available in between.

But Austi-Con will again have a larger charity focus. A silent auction will be held throughout the weekend with proceeds going to the Autism Day Camp programs in Austin, which are run through the Hormel Historic Home.  Three camps are held throughout the summer, and Kate is the director of one of the camps, called Camp Just for Me. 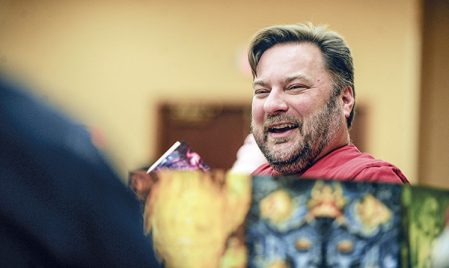 John Dahlstrom, as the dungeon master of a game of “Dungeon Crawl Classic,” sets up a play during Austi-Con in 2016 at the Holiday Inn and Convention Center.

“We’re very fortunate to have these camps in Austin and they are an important cause to my wife,” Jordal said in a press release. “I thought it would be a really nice way to give back to the community.”

A “Magic the Gathering” game will hold drafts with the proceeds going to the autism camps.

“Hopefully we’ll raise another … decent chunk of money for them,” Jordal said.

Along with games like the Vietnam-era game and “Godzilla: Monsters Attack!” variety of scheduled games throughout the weekend, as well as open gaming tables.  This event is open to the public for a $10 admission fee. Attendees will also receive a swag bag on a first come, first serve basis. Jordal invited members of the public to come check out the event for free if they are interested, asking that they pay the $10 admission fee if they wind up staying to play.

Many board game companies have provided donations to the event, and there will be play to win events — games in which participants can win the copy of the game they are playing — a board game library, and door prizes.

The Iscevari Marketplace of Owatonna will have a booth to sell games and other items during the weekend.

Attendees can also utilize lodging across the street from the Armory at the Austin Rodeway Inn and Suites for a special convention rate.

For more information about the event, visit the Austi-Con event page on Facebook, visit https://tabletop.events/conventions/austi-con or contact Michael Jordal at jordalmichael@gmail.com.