For the love of nature: Interpretive center opens amid family, praise 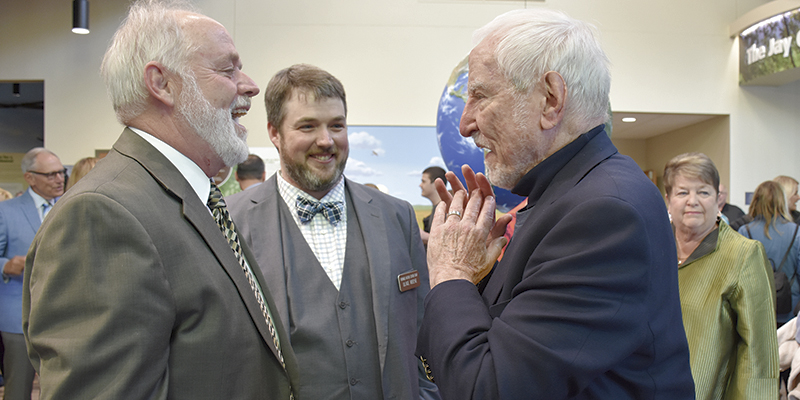 James Hormel was quick to note Friday that the new interpretive center did not quite match his father’s vision for the natural landscape.

True, his father planted something close to a quarter of a million trees in Austin during his lifetime.

But the truth is, he said, the new $7 million Jay C. Hormel Nature Center and its 500 acres “far surpasses” anything his father, Jay C. Hormel, “could have ever envisioned.”

“This,” he said as he stood in the entrance of the new center, during a special donor celebration before the grand opening Saturday, “is just a wonderful building, a wonderful place.”

Hormel and 40 of his family came to Austin to tour the center, named in his father’s honor. Children, grandchildren and great-grandchildren toured the exhibits, chatted with staff, and enjoyed the evening’s festivities. 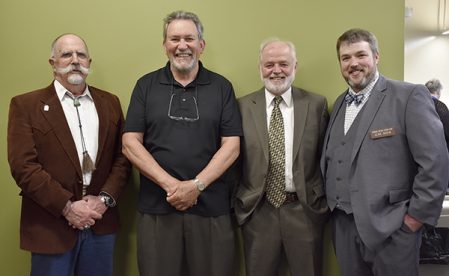 The four directors of the Jay C. Hormel Nature Center pose for a photo together during a sneak peek of the new interpretive center. Pictured, from left, are: Richard Birger, Vince Shay, Larry Dolphin and Luke Reese. Deb Nicklay/deb.nicklay@austindailyherald.com

“I’ve never been here before,” said George Hormel, grandson of James’ brother, Geordie. “I really like the small-town vibe; I love this,” he said, waving toward the exhibits. “It’s great.”

“It’s a beautiful building; and I love the dotted windows,” she said, referring to the special window treatments that help birds avoid crashes. “And we have been so warmly welcomed here.”

Two of the smaller Hormel family members — Jay C.’s great-great grandsons, Jude Miller, 6; and Roman Miller, 7 — were found having fun running in and out of the tunnels underneath the prairie exhibit.

Later, during a formal presentation talk, James Hormel said the center “was modest in its beginnings, but not in its dreams.”

“That vision,” he added, was “not just for an arboretum … but a whole landscape of what Minnesota could have been if left to nature … we can all be proud of what happened here.”

He said the real heroes in the building’s story came with the partnership of organizations that came together to build the center, a thought echoed by former director Larry Dolphin.

Dolphin praised the partnership that turned out to be “rock-solid” because of the Hormel family, the planning partners and the donors who stepped up, “whether it was for $5 or $300,000.”

“We are so fortunate to have this place,” Dolphin said. “This was a ‘we’ project, right from the beginning” and applauded the work done by current director Luke Reese and staff, “who went beyond the norm” to carry on while the center, with all its demands, was being built. 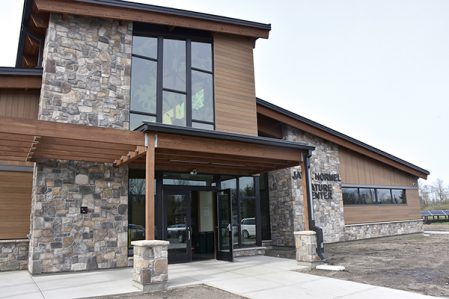 He said the installation of solar power, geothermal and having an electric station all speak of the commitment to renewable fuels and education on climate change, which he said, “is real. Those are not alternative facts .. we need to live more lightly on this planet … we need renewable energy” that will make the planet safe “not only for us but for six generations beyond that.” Places like the interpretive center are needed to help generations understand the needs of nature.

Reese, who grew up in Austin, spent time at the center while he was growing up and to return as director was the best of all worlds for him and applauded Dolphin for his work and commitment to the center, the staff who worked hard for the center, and the many volunteers without whose help the center could not operate. He said everyone was pleased when 50 showed up for a recent training.

Foundation Chairman Gary Ray also extended his appreciation to the partnerships that made the center possible, and the people of Austin. He noted that the grand opening on Saturday, scheduled to coincide with Earth Day, “was fitting” since its theme is “Environment and Climate Literacy.”

“Because if you are looking for knowledge about our environment … you’re in the right place,” he said.

He said Jay C. Hormel, the man who loved creativity and nature, “would have loved this place. He believed in lifelong learning, thinking, dreaming … who always said, ‘innovate, don’t imitate.’ The center reflects Hormel’s unique nature.

Ray added that “it is here and here alone … that there is something named after the man and not the family.”

Ray also applauded the work of the community that donated close to $1 million to the project.

“That is unbelievable,” he said.

James Hormel said the most significant part of the center was its educational value, and the legacy of the land that it reflects.

“Our charge, for all of us, is to make sure that the nature center doesn’t exist in a vacuum … that it continues to be the wonderful, growing place that it is.”