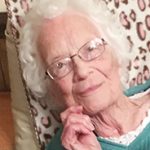 She was born April 26, 1923, in St. Louis, Missouri, the daughter of Benjamin and Elizabeth Meyer Jennemann. Before moving to Watauga County, Mrs. Sathre was an active member of St. Edwards Catholic Church in Austin. Love of family was her highest priority. Libby was one who possessed a great sense of humor and was a lady who never met a stranger.

She was preceded in death by her husband, Vernon “Bud” Sathre.

A funeral Mass will be celebrated at 11 a.m. on Friday, May 5, at St. Edwards Catholic Church in Austin. Friends may call at 10 a.m. at the church before the service. Interment will follow the service at Calvary Cemetery in Austin.