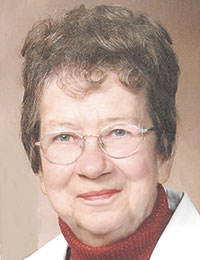 Donna Marie Looman was born Aug. 12, 1934, in Kimball, Minnesota, the daughter of John and Mary (Arens) Looman. She graduated from Kimball High School in 1952. On Aug. 13, 1955, Donna and Douglas Conradt were united in marriage in Kimball. In 1956, the couple moved to Rose Creek, where they owned and operated the Rose Creek Lockers. Together they raised three sons. Donna enjoyed doing crafts, gardening and tending to her flowers, baking and canning. In her younger years while living in Rose Creek, she enjoyed bowling. Donna was a member of St. Peter’s Catholic Church in Rose Creek, where she participated in the Ladies Parish Unit. She especially enjoyed spending time with her grandchildren. Donna was a devoted wife, mother, and grandmother who will be dearly missed.

A private family funeral service will be held. Public visitation will be held from 9:30 to 10:30 a.m. on Saturday, April 29, 2017, at Worlein Funeral Home in Austin. Interment will be in St. Peter’s Catholic Cemetery.