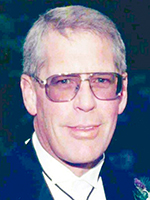 Craig was born Aug. 5, 1951, in Austin to Donald and Mary Huinker. He grew up in Austin where he graduated from Austin High School.

On Nov. 7, 2014, he married Linda Solis in California. Craig was a U.S. Army veteran and worked as a truck driver until his retirement. He was a member of Queen of Angels Catholic Church. Craig enjoyed working on his yard and loved to go to the car shows.

He is preceded in death by his first wife, Diane (Ludwig); parents, Donald and Mary Huinker; brother, Phillip Huinker; two nephews; and one niece.

A funeral Mass will be celebrated at 11 a.m. on Thursday, April 27, 2017, at Queen of Angels Catholic Church with Father Raul Silva officiating. There will be a 6:30 p.m. wake service on Wednesday at Mayer Funeral Home where friends may call from 4 to 7 p.m. There will also be visitation one hour before the service at the church on Thursday. Interment will be in Calvary Cemetery with military rites by American Legion Post 91.

Mayer Funeral Home is in  charge of arrangements. Condolences may be left online at www.mayerfh.com.