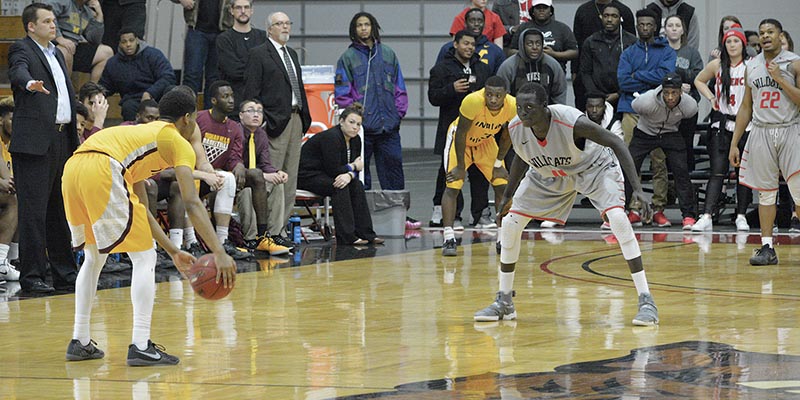 Gach Gach plays defense during a game from this past season. Gach has committed to play basketball for NCAA Division II West Texas A & M. Photo courtesy of the Wahpeton Daily News.

After two years of standing out a the Division I NJCAA level, Austin grad Gach Gach is ready to move on to the world of Division II college basketball.

Gach recently made his commitment to West Texas A & M University, which is located in Canyon, Texas, and he will receive a full athletic scholarship with the Buffaloes. Gach had a total of five Division II offers and a couple of those were in the Northern Sun Conference, where Austin grads Zach Wessels, Tom Aase and Ajuda Nywesh play. Gach was tempted to compete against his former classmates, but he had his heart set on Texas, where the Buffaloes had been in contact with him dating back to his junior year of high school.

“It was tough, but I believe that West Texas A & M will be the best for me academically and athletically,” Gach said. “They have a chance to win a national championship and that’s been one of my goals. It was pretty important for me to find a winning program. That’s all I’ve done and it’s natural for me. I wanted to find a team that fit my style.” 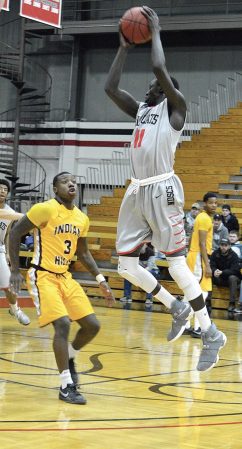 Gach Gach in action with the North Dakota State School of Science this season. Gach has signed to play basketball with NCAA Division West Texas A&M. Photo courtesy of the Wahpeton Daily News

The Buffaloes made it to the sweet 16 in the NCAA Division II national tournament last season and much of their roster will return in the winter. Gach said the squad is looking for a shooter and he’s hoping to fill that role as small forward.

Gach is coming off a stellar sophomore season at North Dakota State College of Science in Wahpeton, N.D. as he averaged 15.9 points, 4.9 rebounds, 1.8 assists and .8 steals per game, while shooting 42 percent from the field, 41 percent on three-pointers and 78 percent on free throws.

West TexasA & M University is a program on the rise and it went 26-9 overall this last season. The team was 15-0 at home and it features a coaching staff that helped lead Winona State University to a national title in 2008.

NDSCS went 60-9 overall in Gach’s two seasons with the Wildcats and the team played in the Division I NJCAA national tournament in Gach’s freshman season. Gach was also a key player for the the Packer basketball teams that took second place in the Minnesota Class AAA state boys basketball team in 2013 and 2014.

“With a degree, you can go further in life and that means a lot to me,” Gach said. “You can’t play basketball forever. I’m the first person in my family to get a degree and I’m hoping to get a second degree at West Texas. I didn’t realize it in high school, but now I see how much that means.”