A mixed report card for Trump as 100th day approaches 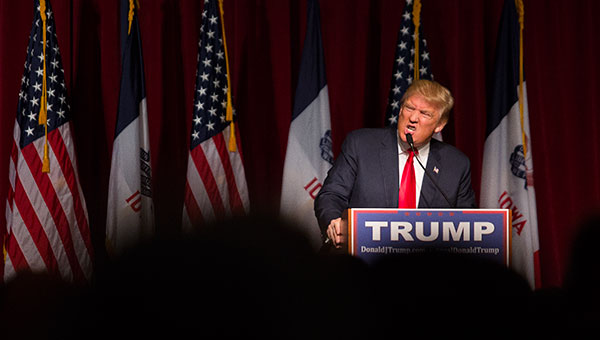 Donald Trump speaks to the crowd at a rally last year at the Surf Ballroom and Museum in Clear Lake, Iowa. Colleen Harrison/Albert Lea Tribune.

As President Donald Trump nears his 100th day in office, several of his campaign promises remain unfulfilled. There’s been no progress on U.S. withdrawal from the North American Free Trade Agreement or his infrastructure and tax plans. But his record so far includes accomplishments, topped by his Supreme Court nominee’s confirmation and the healthy stock market, and disappointments, such as a stalled overhaul of the Affordable Care Act and a failed travel ban. A tally:

Trade pact: Keeping a campaign pledge, Trump on Jan. 23 abandoned the Trans-Pacific Partnership. The 12-nation pact was one of President Obama’s signature achievements. “We’re going to stop the ridiculous trade deals that have … taken companies out of our country,” Trump said.

Speech to Congress: Trump promised to lower taxes, replace the Affordable Care Act and fight terrorism in his well-received Feb. 28 speech to a joint session of Congress — the equivalent of a State of the Union address for a new president.

“From now on, America will be empowered by our aspirations, not burdened by our fears, inspired by the future, not bound by the failures of the past, and guided by a vision, not blinded by our doubts,” the president said.

China diplomacy: Trump talked tough about China during the campaign, but after his April 6-7 meetings with Chinese President Xi Jinping at Mar-a-Lago in Florida, the president changed his mind about labeling the country a currency manipulator. Trump also made it clear after the summit that he has good rapport with Xi and that he expects China to help defuse tensions on the Korean Peninsula. Since then, Xi has publicly urged calm.

Bombing Syria: Trump’s decision to target a Syrian airfield with 59 cruise missiles on April 6 was met with broad approval, including from Democrats in Congress. The bombing followed Syria’s use of sarin gas on its own people and highlighted Trump’s foreign-policy break with Obama, who declared a “red line” against Syria in 2013 and declined to enforce it after its use of chemical weapons then.

Supreme Court: It took a dramatic showdown and a change of Senate rules, lowering the number of votes required for confirmation from 60 to a simple majority, but Neil Gorsuch’s April 7 confirmation was a political victory for Trump. Only three Democrats, including North Dakota Sen. Heidi Heitkamp, joined Republicans in voting for the lifetime appointment of the conservative judge.

Bombing ISIS: On April 13, a 22,000-pound “Mother of All Bombs” was dropped by U.S. forces on a tunnel complex in Afghanistan, killing 94 Islamic State of Iraq and Syria fighters. The deployment of the giant bomb was viewed by some observers as a message to North Korea, Iran and other countries that Trump will be more aggressive than his predecessor in the use of U.S. military might.

Regulations rollback: Trump has signed more than a dozen bills repealing regulations through the Congressional Review Act, which allows Congress to reject rules within 60 days of publication — and ban their revival. Among the targeted rules: regulations on internet privacy and limits for coal mining waste in waterways. Trump also signed several executive orders, including one that could negate Obama’s Clean Power Plan requiring cuts in carbon-dioxide emissions from electric utilities.

Stock market: The Dow Jones industrial average has climbed about 4 percent since Trump took office, and the S&P 500 index is on track for a similar gain since Jan. 20.

Travel ban: On Feb. 3, a federal judge in Washington state blocked Trump’s first proposal to ban people from seven mostly Muslim countries from entering the U.S. The president revised the plan and narrowed it to six countries. The second attempt was blocked on March 16 by federal judges in Hawaii and Maryland. The president has complained about “judicial overreach” and suggested that he could appeal to the Supreme Court, but the issue seems to have lost some urgency.

Flynn’s exit: Michael Flynn, Trump’s first national security adviser, resigned on Feb. 13 after it was revealed that he had misled Vice President Mike Pence about his conversations with Sergey Kislyak, Russia’s ambassador to the United States. The FBI and Congress’ intelligence committees continue to investigate Russia’s involvement in the 2016 election and possible cooperation by the Trump campaign with Russia’s undermining of Hillary Clinton’s presidential bid.

Obama wiretap: Without citing any evidence, Trump on March 4 accused President Obama of ordering a wiretap of Trump Tower. FBI Director James Comey said there was no truth to the allegation. But this month, Trump repeated the charge, calling it “one of the biggest stories of our time.” Incidental surveillance of some administration officials and the “unmasking” of their identities in intelligence reports later surfaced, but there’s no indication that surveillance targeted Trump.

Health care overhaul: In a stunning setback, Trump’s effort to overhaul the U.S. health care system collapsed on March 24 when House Republican leaders pulled the legislation after opposition by conservatives left them short of the votes needed for passage. Trump has promised to try again.

Job creation: On April 11, Trump told business leaders, “We’ve created over 600,000 jobs already.” He has declared himself “the greatest jobs producer that God ever created.” But the Labor Department reported that 317,000 jobs were created in February and March.

Staff infighting: Talk of disputes between chief strategist Steve Bannon and Jared Kushner, Trump’s son-in-law and a senior adviser, led to speculation about a staff shake-up — the sort of distraction that no White House needs.

Border wall: A promise to build a wall along the U.S.-Mexico border was a staple in Trump’s campaign speeches. So was his pledge that Mexico would pay for it. Congress is exploring funding options for the wall, but a Department of Homeland Security report put the price tag as high as $21 billion — much higher than Trump’s estimate of $12 billion. “We’re building the wall,” he said in February. “In fact it’s going to start very soon.” But there are few signs that the Republicans who control Congress intend to move quickly to fulfill that prediction. Trump also told supporters in the campaign that he would deport all 11 million people in the U.S. illegally, but he hasn’t taken concrete steps to do that.

Public opinion: A Gallup Poll released Monday found that 45 percent of Americans said that Trump keeps his promises, down from 62 percent in February.