Getting twiggy with it; Minneapolis woman builds wonder in the woods 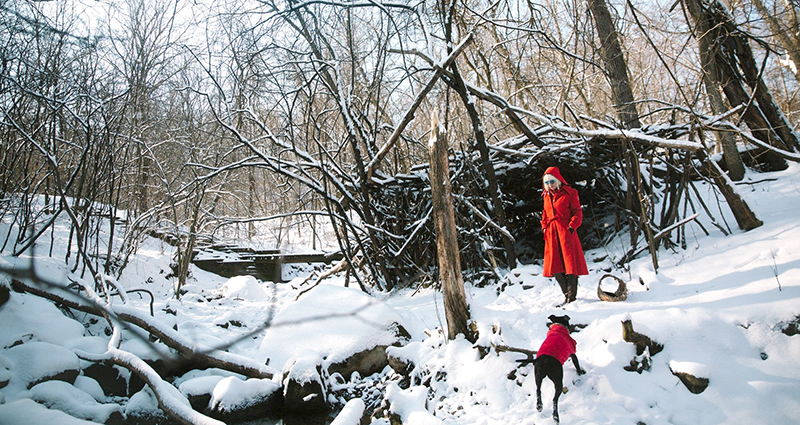 Katie Carrot and her dog, Jiggy, brave the fresh snow on March 13 to explore one of the stick forts Carrot has built in parks around Minneapolis. Evan Frost/MPR News

MINNEAPOLIS — Katie Carrot has built you a fort. Actually, she’s built you two.

Now she wants you to find them.

We’ll give you a hint: You’ll need to head to parks in Minneapolis.

It’s all part of her master plan that weaves together the outdoors, community engagement and the environment — with a dash of fairy-tale magic and mystery for good measure.

“People don’t see magical things. They only see it on movies, or as a child in a children’s book,” she said. “To see it in real life, it’s so out of the norm. It just awakens people.”

Specifically, she’s hoping that stumbling on one of her whimsical forts tucked in the woods spurs people to stop being so detached — not only from each other, but also from nature and the environment.

Katie Carrot’s adventures in stick-fort-making began about five years ago, after she moved to Minnesota from Florida. (Carrot, by the way, is not her real last name. It’s part of the artist handle she’s been using for about a decade.) An outdoor enthusiast, she had noticed over the years that she was encountering fewer and fewer people outside.

“They’re all in front of their plasma screens, in front of TVs, living life through reality TV shows,” she said. “I was really sad for that.”

Meanwhile, she saw that some of those who were supposedly out “with” nature kept their eyes glued to their smartphones instead of actually looking at what was around them. She recalls one woman she saw regularly at a local park who was “always really busy walking through the park on a mission, always on her cellphone, really into what she was doing and not looking around at all.”

But she didn’t really know what to do about it — nor did she really plan to do anything at all — until a walk in a city park one day with her dog, Jiggy.

That day she discovered, nestled deep inside a park in Minneapolis, a dilapidated structure made of sticks and twigs. It was like stumbling across a witch’s hut in the woods (minus the witch).

It was an “A-ha!” moment: This could be her way of showing people the outdoors was something to be enjoyed, that it was OK to be a kid again and do things like building forts in the middle of the woods, and that — within reason — it was OK to talk to strangers.

Moreover, she could do it in a way that wouldn’t hurt the environment.

“I just got sick of all the plastic in the world,” she said. “(This) wasn’t a kit, it was something that came from the earth — it is the earth.”

So she decided to rebuild that ramshackle fort. The process took all summer, since she had to teach herself how to actually make a stick fort, or, as she prefers to call them, “environmental sculptures.” She took her cues from nature, studying birds’ nests to see how those critters place and intertwine twigs.

Almost immediately, she began noticing that she had piqued people’s curiosities. Strangers approached her to talk about the fort or ask who made it (at first, she said, she’d tell them it was the work of elves and gnomes). She encouraged others to help her build (“Add a stick!” she’d yell to passersby).

Her plan was working — but maybe too well.

Eventually, even the park’s ranger found the fort. And since Katie Carrot had never asked for permission to build on park land, it was demolished.

“People can’t just come on a state park land or federal park land and build whatever they want or do whatever they want,” said John Anfinson, superintendent of the Mississippi National River and Recreation Area, which covers 72 miles along the river, from Ramsey to Hastings, Minn. Carrot’s fort had been on land he oversees.

“If we let that happen, what would happen to those places?,” he said.

The Minneapolis Park and Recreation Board also cited public safety as a factor for dismantling any unauthorized structures, adding that the people responsible could potentially be cited by park police.

Still, what Katie Carrot saw two weeks after her first fort was razed inspired her to keep on going: “Somebody had started rebuilding,” she said.

That was when she knew she was on to something.

Which takes us back to the beginning of this story: She has made two new forts since then.

Recently, during a visit to one of them, she ran into Candace Mainville, who asked her if she was the one who’d built it.

When Katie said yes, Mainville thanked her: “It adds some beauty and creativity, like a piece of art, to the park,” Mainville said.

That kind of reaction is why Katie Carrot wants to make more — she’s even willing to build one in your yard. These structures, she said, are just as much yours as they are hers. In the new forts, some people have left behind little pieces of themselves — a troll doll, and flowers.