Awesome art; Noted painter — all of 15 — spurs excitement at I. J. Holton 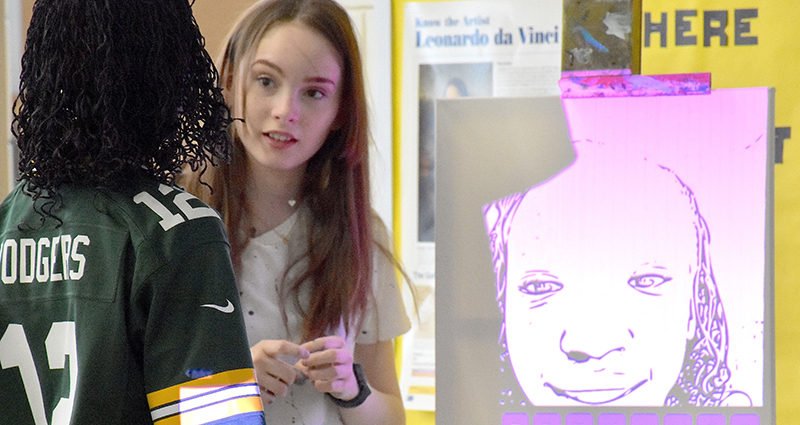 Artist Autumn DeForest came to I. J. Holton under the auspices of Turnaround Arts: Minnesota, an arts and school improvement program. Photos by Deb Nicklay/deb.nicklay@austindailyherald.com

Madison Branchaud, 12, just couldn’t stop enthusing over two things: Her art (“I am actually in love with art,” she tells you excitedly. “See that unicorn over there? I did that!”) and artist Autumn DeForest (“I think she is amazing, wonderful and I love her art pieces!”)

But that was a fair representation of the enthusiasm rocketing around the art room at I.J. Holton on Wednesday. And, DeForest — at 15, not a lot older than these students — was working magic in the midst of a small media storm.

Cameras clicking, video rolling, DeForest kept her cool while trying to instruct fifth and sixth graders in the fine art of self-portraiture. 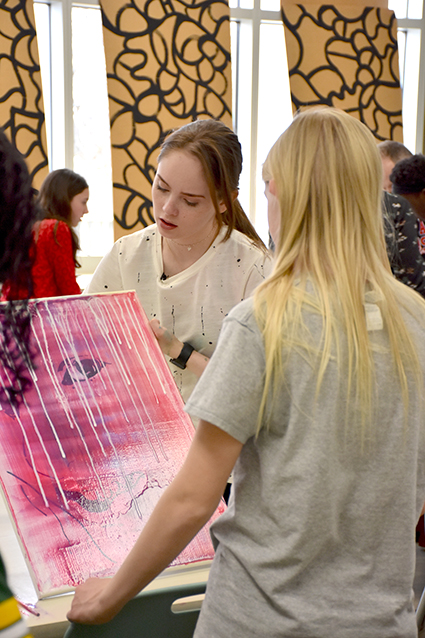 There was a reason for the heightened interest in DeForest: From the age of 5, her paintings have been praised and applauded by the art world. Noted as a child prodigy, DeForest‘s works sell for thousands of dollars and one of her pieces is part of the Vatican collection, after she presented a painting to Pope Francis when she traveled to Vatican City upon his invitation.

She came to I. J. Holton under the auspices of Turnaround Arts: Minnesota, an arts and school improvement program. I. J. Holton was one of eight schools selected to be part. After a morning assembly, DeForest worked all afternoon with different sessions of fifth and sixth graders, creating self-portraits.

For all her success, it was almost easy to miss DeForest as she roamed from table to table, instructing, coaching, praising and critiquing the works of the fifth and sixth graders. Unless you looked closely, you could almost mistake her for one of the students.

Students did not miss her, however; between sessions, girls lined up for autographs.

“She is really excellent,” said sixth grader Emily Hjelmen. “I’ve never done anything like this. She’s really nice; it’s interesting, because she has a different way of processing everything.” 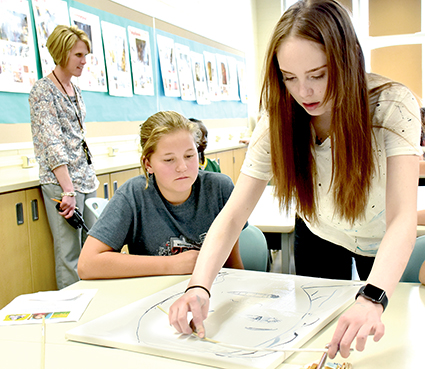 Artist Autumn DeForest, right, demonstrates a technique while I. J. Holton sixth grader Emily Hjelmen looks on. DeForest, who began painting when she was 5 and whose paintings today command thousands of dollars, worked with the students Wednesday as part of the Turnaround Arts: Minnesota program.

“She doesn’t care if the painting looks good; she cares about whether she’s having fun.”

Using digital technology, images of the student were shone onto canvases. With help from DeForest, as well as her dad, Doug, students outlined their images as they wanted, and then applied a variety of paint colors and techniques.

DeForest said she was attracted to Turnaround for its mission to provide the arts in places where children too often do not have the experience.

She calls working with the program “an incredible honor,” and applauds organizers for attracting inspiring people such as YoY o Ma, Misty Copeland and Elton John to work with children.

“What they do, what they accomplish, is quite remarkable,” she said.

Today, she said she thought it was important to incorporate issues important to her in her art: social justice, equal rights, the empowerment of women.

Empowering kids is as important to her, she said. Choosing to help students create self-portraits was an intentional choice.

“I wanted a personal, yet creative opportunity for them; something that they can take home with their image on it, something they could say, ‘I did this. I can.’ ”

Turnaround Arts: Minnesota is an arts and school improvement program, supported by the Perpich Center for Arts Education, which provides art outreach, professional development, research, curriculum and standards development to the schools.

Schools qualify for Turnaround Arts after being designated as a school in need of improvement based on criteria set by the Minnesota Department of Education. I.J. Holton is one of eight such schools in Minnesota; five of the eight are in the Twin Cities area. The schools represent a diversity of student demographics in urban, suburban and rural settings.

According to the Perpich Center, federal data shows that students who need art education the most may be getting it the least. High poverty schools often have little art instruction. Decades of research has shown that students engaged in the arts perform better than their peers academically.