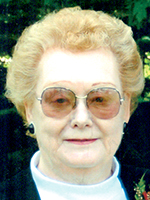 Joan was born March 31, 1934, in Austin, Minnesota, the daughter of Raymond and Dorothy (Hovey) Ulven. She graduated from Austin High School. Joan married Walter Adams on April 24, 1954, at Visitation Catholic Church in Stacyville. She worked beside her husband in his painting and decorating business. Joan was a member of Visitation Catholic Church. She was also member of Visitation Christian Mothers and Stacyville Firemen’s Auxiliary. She enjoyed bowling, crocheting and Friday night family get-togethers. Family was very important to Joan.

She was preceded in death by her parents; husband, Walter in 2011; and brother, Duane Ulven.