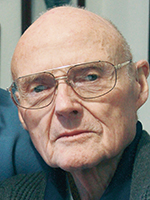 The Austin man who sought to raise awareness about dying with dignity has died.

McDonald spent the majority of his adult career as director of special education for Austin Public Schools. He had always been busy and active in the community as a member of Austin Public Library Board, the Cedar Valley Services Board and his church.

When he was diagnosed with cancer in July, he found his options for controlling the way he died were limited. A “compassionate care” law had failed to move forward at the Minnesota Legislature and a letter to Gov. Mark Dayton went unanswered. In November, he turned to the press with his concerns.

Such a law would allow a terminally ill patient to obtain a doctor’s prescription for medication and self-administer the dose.

To McDonald, such an end made sense.

“I’ve got a wife and a son for whom I see no reason for them to go through a time when I am miserable to myself and miserable to them. It’s selfish, I admit. But we are living in a country whose most basic thought is freedom of the individual and not making decisions that other people have to live by. I want to make my own choice.” he said. “I want to die well.”

Some of his wish for raising awareness about death with dignity was answered: After his initial story in the Austin Daily Herald, his story circulated to a number of news agencies across Minnesota, Wisconsin and even Oklahoma.

Services are pending at Worlein Funeral Home in Austin.