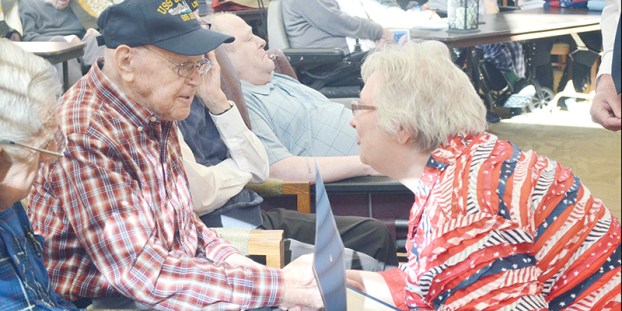 ‘You changed my life’: Veterans celebrated at St. Mark’s

Heartland Hospice Spiritual Coordinator Josh Johnson said he never knows exactly what to say when he meets a veteran.

“Some days, words are just insufficient; today is one of those days.”

Johnson was speaking to a group of veterans, friends and families at St. Mark’s Living on Friday. The group also included veterans from Primrose Retirement Community.

He said his own history is anchored in service. His grandfather served during World War II in Germany; his father in Vietnam. 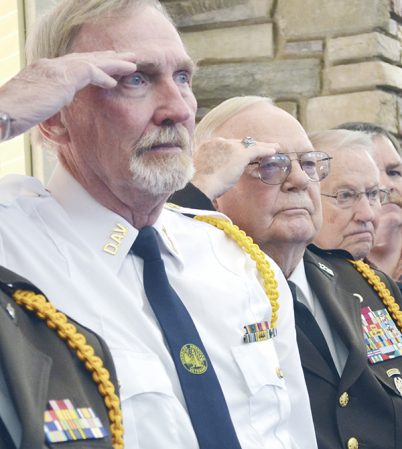 A line of veterans salute as they sang national anthem during ceremonies Friday at St. Mark’s Living. Deb Nicklay/deb.nicklay@austindailyherald.com

He recalled his father saying to him that real sacrifice is a soldier “knowing what he was going to and sacrificing his comfort for ours anyway.”

He added that the sentiment sounded familiar.

“Sounds like Jesus to me,” he said and read from John 15:13: “Greater love has no one than this: to lay down one’s life for one’s friends.”

VFW Commander Scott Wiechmann agreed, adding that it was wonderful to thank veterans for their service on Veteran’s Day.

“But I hope you remember to thank them everyday,” he said.

He acknowledged “there is division in our country” right now … and I hope and pray we can come together as a nation.”

But even if we disagree with a decision to go to war, “we still need to thank our veterans for their service, to thank them for their commitment to this country.”

The day was a celebration of veteran service, a joint effort between St. Mark’s Living and Heartland Hospice. About 40 veterans, serving from World War II forward, were honored with special veteran pins, as well as a quilt from the Quilts of Valor organization, based at the First Congregational Church UCC in Austin. The Austin High School Choir provided music.