Signs of the Nicol family history hang all around Nicol’s Fast Lube at 100 11th Ave. NW in Austin.

“This is quite the history behind it all,” said Linda Nicol as her husband, Neal Nicol Jr., better known as Bill, looked at a few of the old pictures.

As one chapter of the family history closes, the Nicols are looking ahead to some changes and upkeep at one of its Austin businesses.

The Nicol family sold its self-serve car wash, which was just west of the Nicol’s Fast Lube, to Hormel Foods Corp. and closed the wash in September. Hormel will likely raze the building to use the site for additional parking for its south corporate offices.

Bill and Linda looked to the dispel rumors about the sale, as some customers approached the Nicols thinking Hormel scooped up the site, which Bill and Linda said was not the case.

“We approached Hormel … and they were very fair, very good to deal with,” Bill said.

Bill and Linda opened the wash in 1990 and decided to approach Hormel because of age and a few health issues, as the two are cutting back.

Troy and Tara are planning some work to the Nicol’s Fast Lube building, but they don’t have specific plans yet. They hope to have some of the work done yet this year.

“It needs a facelift,” Troy said.

Along with Nicol’s Fast Lube, Troy also owns Troy’s Complete Automotive at 24223 534th Ave. in Austin, he does towing and the family sells used cars out of the 534th Avenue site. 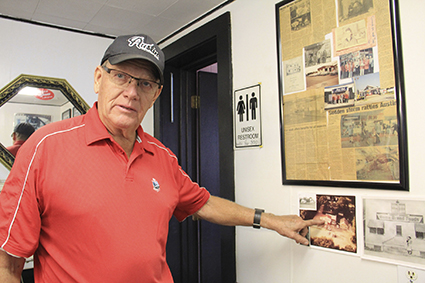 Bill, 71, isn’t fully retired, as he manages the Parks Trailer Wash and helps with the family dealership.

The pictures, spread around the fast lube store, include pictures of the shop Bill’s father and family started in the 1940s.

The Nicol’s family roots trace back to an area with their name — the Nicolville neighborhood, which gained its name in the 1930s during the depression when Bill’s grandfather bought and resold homes in the neighborhood.

Bill’s father, Neal Sr., was a mechanic in the U.S. Air Force during World War II and started fixing cars after the war at a lot given to him by his father.

Bill and Linda took over the business in Nicolville in the 1970s and had the fast lube and car wash site after getting a lot of work in town. They had been at Jerry’s Other Place eating and saw the site for lease.

Along with the recently closed self-serve wash, Troy and Bill built an automatic car wash in back of the fast lube site in 1989.

For many years, the Nicols kept a Nicolville shop. They’d do the small work at Nicol’s Fast Lube where there are only two bays, while the bigger work would be moved up to the Nicolville shop. 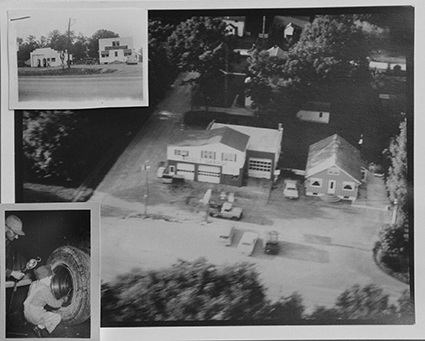 This collage shows just a few of the photos and new clippings hanging around Nicol’s Fast Lube in Austin. The main photo shows the family’s former shop in Nicolville, while the picture in the lower left shows Bill Nicol, now 71, at around age 10 working at the family shop.

Today, Troy does something similar: He does the quick work — anything that takes less than an hour — at the fast lube shop and the bigger jobs — transmissions, oil changes, engine work, etc — at Troy’s Complete Automotive.

Nicol’s Fast Lube also has gas service, and attendants will pump gas for people who request it and check their oil and fluid levels. They’ll also pick up cars for oil changes and work.

Between the two shops, the Nicols have about five people working for them, and Troy and Anderson have managed both for about a year.

While Troy is keeping the business in the family, Bill and Linda joke that wasn’t always the outlook.

“I told him not to follow in my footsteps,” Bill jokes.

Right out of high school, Troy moved to the cities and worked in construction before slowly making his way home and eventually getting into the business.

Troy’s son, Cole, has also worked a bit at the shop, but Troy jokes his son, “needs to go get a job.” Cole is a student at Winona State University.

Between Tara’s three children and the Nicols’ eight grandchildren, each has participated in the family business in some way.

The business has seen challenges over the years. They had the quick lube in Austin and their Nicolville shop during the 1985 Hormel Foods strike and several floods.

“We were here through it all, and the retirement account always seemed to end up going back in the business,” Bill said.

But Linda said one highlight has been the many great workers they’ve had over the years, many of which have gone on to other careers around Austin.

Another is the Nicols’ many regular customers over the years.

“Those are cherished memories,” Linda said.