Impact Martial Arts and Fitness is starting to build momentum toward becoming a perennial power in martial arts competitions.

After crowning 10 state champions last season, Impact had 13 state championships this year under the guidance of Troy Williams. The gym also had competitors amongst the 4,500 martial artists at nationals the last two years.

Impact has competitors ranging from young children who are trying martial arts for the first time to experienced martial arts who have competed for years.

One thing is for sure, everybody who trains at Impact learns discipline and focus as well as the skills it takes to compete.

“It builds their self esteem and their confidence,” Williams said. “Some kids just do form and they’ll come out and do it front of two thousand people without a partner. Some kids have their confidence go up and it helps with everything from school to daily life. These kids get better grades and their disciplined. I run a tight ship in here.”

Impact competes in six competitions per year leading up to the state meet. The group meets on Tuesdays to focus on self defense and it works on sparring on Thursday nights. 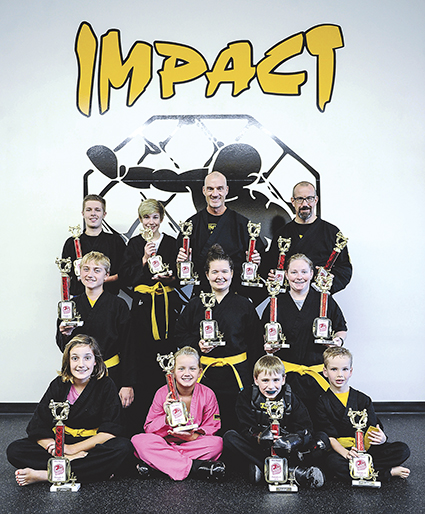 Owen Wahlstrom, a 13-year old, said that his martial arts training has carried over to his studies. He’s also learned some strong physical tools.

“I learn how to defend myself if I ever need to. That’s why I do it,” Owen said.

Owen didn’t win a state title, but he lost to Impact teammate Gabe Denhartog, 13. Both boys said that it felt good to represent the same team in the title match.

Williams was happy to have two Impact competitors in the match, but he wasn’t able to pick one to cheer for.

“I just walked away and held my hands up. I couldn’t have been more proud,” Williams said.

The competitions require plenty of focus from the competitors as they are based on a point system and all different types of martial arts are used. Within a blink of an eye, a competitor could be eliminated if they falter or slip up.

“It’s a quick game and it’s single elimination,” Williams said. “Three kicks and a punch and you could be done for the day. It’s impressive that we’ve had so much success.”

Williams said that matches get more intense when the ranks get higher and Austin has had one of the top competitors at the high level as Robert Andrews, a 24-year old, hasn’t lost in a competition and he won two national titles in 2015 and Jerry McCarthy took second in nationals in the 40 and over competition, despite being in his late 60s.

While winning state championships and staying competitive is nice, Williams said he also makes sure that his martial artists aren’t looking to use what they learn for bad causes.

“My kids don’t start fights and there is a no bullying sign in the gym,” Williams said. “They have to stay disciplined.”

Bringing it all back home; Austin High homecoming underway