MINNEAPOLIS — The mother of a Minnesota boy missing since 1989 said Saturday that his remains have been found.

Patty Wetterling said in a text message to KARE-TV that 11-year-old Jacob Wetterling “has been found and our hearts are broken.” She did not immediately respond to calls and text messages from The Associated Press. 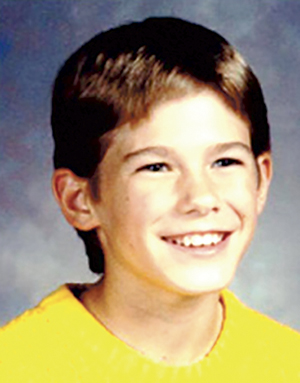 Jacob was riding his bicycle with his brother and a friend on Oct. 22, 1989, when a masked gunman abducted him from a rural road near his home in St. Joseph, about 80 miles northwest of Minneapolis. He hasn’t been seen since.

No one has been arrested or charged in his abduction, which led to changes in sex offender registration laws.

But last year, authorities took another look at the case, and were led to Danny Heinrich, a man they called a “person of interest” in Jacob’s kidnapping.

Heinrich, 53, denied any involvement in Jacob’s abduction, and was not charged with that crime. But he has pleaded not guilty to 25 federal child pornography charges and is scheduled to go on trial on those counts in October.

KSTP-TV reported Saturday that Heinrich led authorities to remains earlier this week. KSTP, citing two unidentified sources with direct knowledge of the case, reported the remains were found at an undisclosed location in central Minnesota and were being tested for identification.

The FBI has said previously that Heinrich matched the general description of a man who assaulted several boys in Paynesville from 1986 to 1988. Earlier this year, Heinrich’s DNA was found on the sweatshirt of a 12-year-old boy who was kidnapped from Cold Spring and sexually assaulted nine months before Jacob’s abduction.

Heinrich’s attorney did not respond to an emailed request for comment Saturday.

Patty Wetterling always kept hope her son would be found alive. She became a national advocate for children, and with her husband, Jerry Wetterling, founded the Jacob Wetterling Resource Center, which works to help communities and families prevent child exploitation. In 1994, Congress passed a law named after Jacob Wetterling requiring states to establish sex offender registries.

The Jacob Wetterling Resource Center posted a statement on its website Saturday, saying they are in “deep grief.”

“We didn’t want Jacob’s story to end this way,” the statement said. “Our hearts are heavy, but we are being held up by all of the people who have been a part of making Jacob’s Hope a light that will never be extinguished. … Jacob, you are loved.”

A timeline of events related to the abduction of 11-year-old Jacob Wetterling of St. Joseph, Minnesota:

•Oct. 22, 1989: Jacob Wetterling, 11, is abducted from a rural road as he rode bikes with his brother and a friend by a masked gunman near his home about 80 miles northwest of Minneapolis.

•Oct. 26, 1989: Deputies on horseback and hundreds of people search for Jacob, but find nothing.

•Oct. 29, 1989: About 225 National Guard troops and 80 Minnesota Department of Natural Resources workers unsuccessfully search for clues. Supporters of the boy’s family release more than 1,000 white balloons after a church service.

•December 1989: Investigators are deluged with tips after they release a new sketch of a suspect. Authorities also say they believe the man who kidnapped Jacob was responsible for the January 1989 abduction and sexual assault of a boy in nearby Cold Spring.

•October 1990: An FBI spokesman says about 2,000 people have been interviewed. More than 700 people attend an anniversary vigil less than two miles from where Jacob was taken.

•2004: Patty Wetterling runs as a Democrat against Republican U.S. Rep. Mark Kennedy in Minnesota’s 6th District. She loses by 30,000 votes in her first political campaign but does not rule out a future run.

•2010: Investigators spend two days searching and digging at a farm near where Jacob Wetterling was last seen. The sheriff later says forensic tests on items taken from the farm show no link to the crime.

•Oct. 29, 2015: Federal authorities say a Minnesota man is a “person of interest.” Danny Heinrich, of Annandale, is arrested on unrelated child pornography charges. Heinrich denies involvement in Jacob’s disappearance and has not been charged in the case.

•Sept. 3, 2016: Patty Wetterling says in a text message to KARE-TV that Jacob’s remains have been found “and our hearts are broken.”

A night of give and take; Packers force five turnovers, but can’t clear hurdle in loss

The Austin football team showed some resolve as it opened its season with a 45-20 loss to Rochester John Marshall... read more