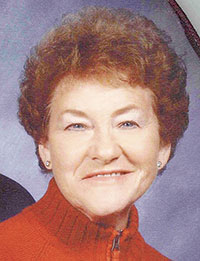 Sylvia was born July 2, 1935, in Claremont, Minnesota, to Dora and Joseph Renchin and was raised in Hayfield, Minnesota. She attended Winona State University and worked as a teacher in LeRoy, Minnesota, before starting her family. Sylvia later worked as a Paraprofessional in the Austin school system for 24 years.

On Aug. 11, 1956, she was united in marriage to Vernon Ginder and lived in Meyer, Iowa, before moving to Lyle, Minnesota, where they raised their family. Sylvia was an active member of Queen of Peace Church in Lyle for many years, and was a founding member of the Lyle Lioness Club and a Lyle Library volunteer. She enjoyed birds, flowers, gardening, fishing, crafts, sewing along with family travel and bus trips across the country and to the casino.

A Funeral Mass will be celebrated 11 a.m. on Wednesday, Sept. 21, 2016, at St. Edwards Catholic Church in Austin with Father James Steffes officiating. Friends may call from 5 to 7 p.m. on Tuesday at Mayer Funeral Home and also one hour before the service at the church on Wednesday. Interment will be in Grandview cemetery.

In lieu of flowers, memorials are preferred to Ronald McDonald House, Rochester, Minnesota, or the donor’s preferred children’s charity given Sylvia’s love of teaching children.