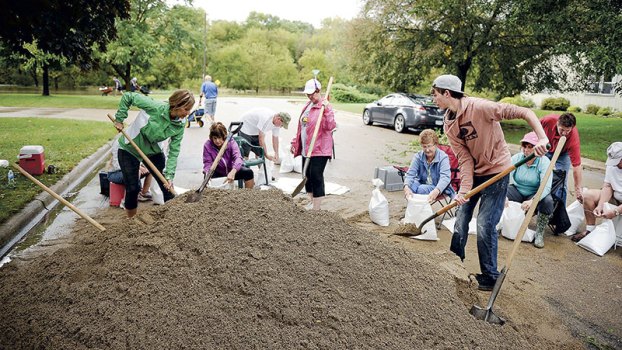 Austin Police Chief Brian Krueger is urging residents to stay out of the flood waters after a 32-year-old man had to be rescued from his car in northeast Austin and several other reports came in of people driving past barricades or children playing in flood water.

Several streets around town were expected to be closed for parts of Friday and potentially into the weekend after flooding from the 3 to 4 inches of rain Austin received overnight Wednesday into Thursday.

Krueger asked residents to use common sense and stay out of flooded areas to stay safe.

Austin Public Schools closed due to hazardous road conditions from the flood waters, and Krueger also urged children to stay out of the water. 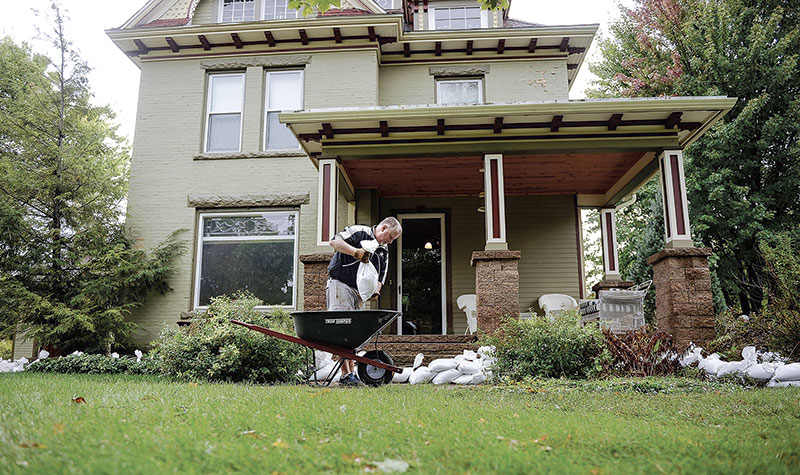 Steve Hovey puts sandbags down in front of his home. Steve and his wife Joyce, with help from neighbors, were putting sandbags down as a precaution against the rising waters of the Turtle Creek. Photos by Eric Johnson/photodesk@austindailyherald.com

“There is definitely a current that may not appear visually,” Krueger said. “… Stay out of the water. Do not drive around any of the barricades. They are up there for a reason: to protect the citizens and their property.”

At 1:52 a.m. Friday, the Austin police and fire departments rescued a 32-year-old man who’d driven around a barricade at Hormel Century Parkway and Eighth Avenue Northeast and gotten his vehicle stuck in water.

The driver followed a truck into the area, which turned around, but the man was unable to turn around after getting too deep water before the car shut down.

“People to need to not drive through water,” Krueger said. “There’s always a different route to get where you want to go.”

Krueger also urged children and people to stay out of the flood water, as officers responded to a report of children in the water. He warned of strong currents on waterways right now and the potential debris under the water.

“Please use common sense,” he said. 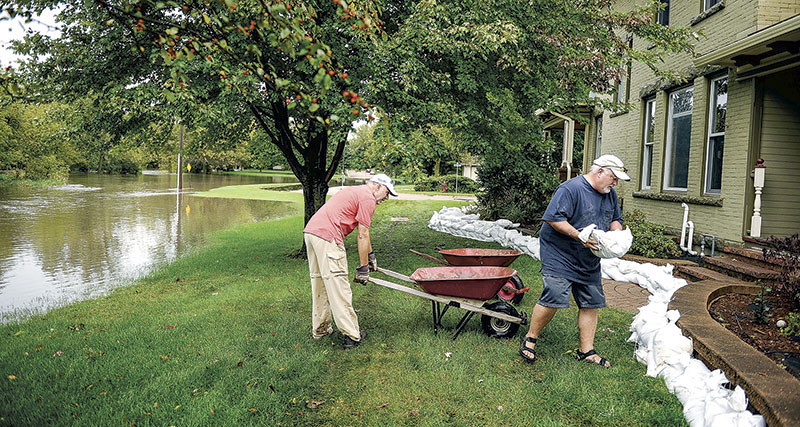 “The main thing during a flood event is for people to be patient,” Lang said.

He noted road closures will continue around Austin at least into Friday, and he said about 10 to 15 roads were closed around town as of Thursday afternoon.

After several past flood events, Lang said most people are used to flooding. But he urged people not to go out sight-seeing because crews will need to be getting around town and there’s limited access due to the closed roads.

With closed roads, open roads like Eighth Avenue and 11th Street Northeast were backing up due to the added traffic on Thursday.

Like most flood events in Austin, Lang said the flooding after Thursday night’s system went in waves starting with street flooding and some closures on Interstate 90 and on 10th Place Northeast.

Around the time those roads open up, Austin often sees the flooding move as waterways like the Cedar River and Turtle Creek rise as waters from the north drain south.

The heaviest flooding has been on Turtle Creek, which was initially projected to exceed the high water mark of 14.8 feet, but it crested below the record at 13.58 feet late Thursday before flood waters began receding. 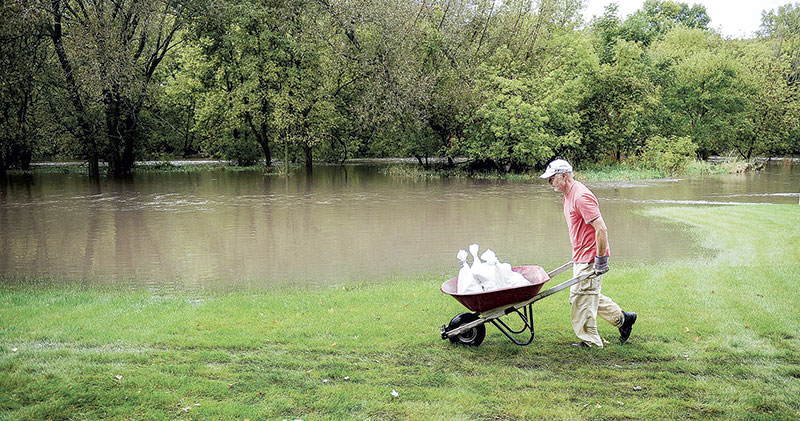 “It is lower than what they had projected, which is a positive thing,” Lang said.

After the rivers crest, it typically takes another eight to 12 hours for the waters to recede and the closures to end, Lang said, so some road closures will continue until the flood waters are gone.

A flood warning was slated to remain in effect in Mower County until about 4 p.m. Saturday or until the flood waters receded.

According to The National Weather Service, waters were expected to drop below flood stage by Saturday night on Turtle Creek, Friday night on the Cedar River in Austin, and sometime Friday on the Cedar in Lansing. 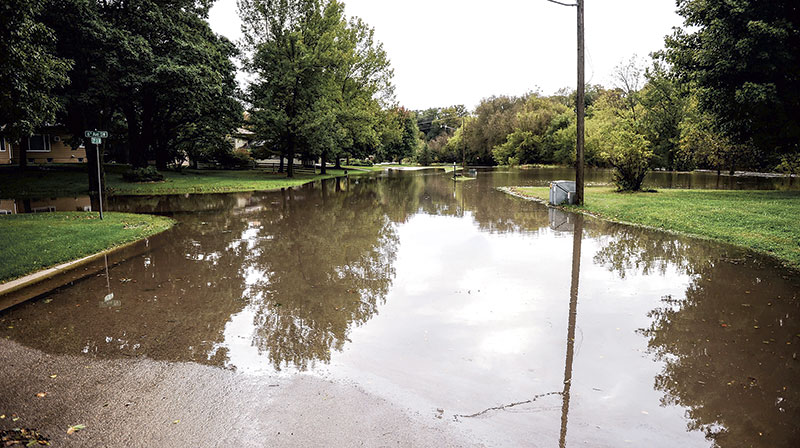 Water from the Turtle Creek overflows its banks and covers the intersection of 6th Avenue and 21st Street Southwest.

This flood wasn’t one Lang would call a “bucket buster” as the heaviest rains went north and to the south, but he said Austin is making good headway in its flood mitigation efforts.

“Every year we’re able to acquire a couple more homes, a couple more structures and through that process with every acquisition that we do we eliminate one person from being impacted by flooding,” he said.

Some sandbagging was still down around town, including at Queen of Angels and by several homeowners. Joyce Hovey and her husband, Steve, put out sandbags around their southwest Austin home next to Turtle Creek where 21st street turns into Seventh Avenue as a precaution.

“There are no water problems right now, but it’s easier to do when we have the time,” Hovey said.

Lang noted the flood wall along North Main Street served its purpose and protected businesses. Without it, he said sandbagging would have been required near Barley’s restaurant.

While some residents questioned if the flood wall could or did cause flooding downstream, Lang said that is just something skeptics will bring up during every future flood event. 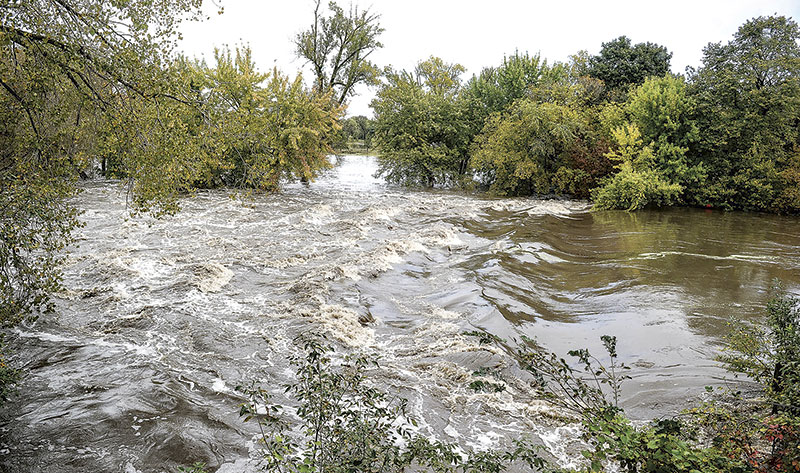 He said that the city put for a lot of work through research, permitting and design with the help of the Minnesota Department of Natural Resources and Cedar River Watershed District to ensure the flood wall doesn’t cause any issues downstream.

“The north main flood control project did not adversely impact other areas around town,” he said.

The biggest factor with storm systems, Lang noted, is where the heaviest rains hit and timing. With heavier rains west toward Albert Lea, Lang said the Turtle Creek Watershed was hit a bit hard.

“Every storm is a little bit different,” Lang said.

The National Weather Service called for a chance of thunderstorms — some capable of producing heavy rains — on Saturday night.

By Nancy Yang MPR.org/90.1 FM This weekend is the first official fall weekend of the year. What better way to... read more