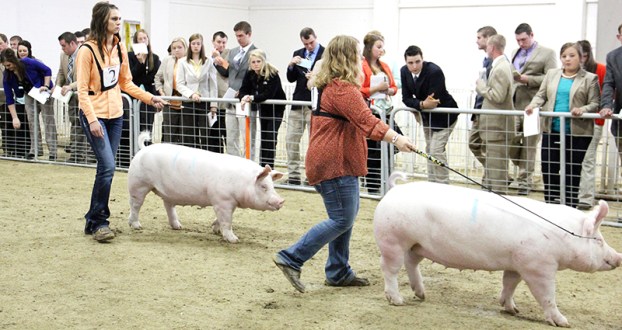 College, 4-H and FFA students watch as hogs are corralled through a ring at Crane Pavilion of the Mower County Fairgrounds last year during a judging contest of the 69th annual National Barrow Show. -- Herald file photo

Give an oink for pigs; National Barrow Show returns

The 70th annual National Barrow Show is returning to the Mower County Fairgrounds Saturday through Wednesday, and the show is open to the public and free of charge.

NBS organizers anticipate more than 900 animals will take part in this year’s show, and many of the nation’s top breeding boars and foundation females, as well as hogs from the eight major purebred breeds, will be entered in the show, held at the Mower County Fairgrounds.

The five-day show begins Saturday with the second annual NBS Collegiate Meats Judging Contest hosted by Hormel Foods Corp. On Sunday, events get underway at the fairgrounds at 9 a.m. with the NBS Junior Classic showmanship event, followed by the NBS Junior Classic Market and Breeding hog shows. Also on Sunday, the community Windsor pork chop dinner starts at 11:30 a.m. in the Plager Building.

On Monday, the college judging contest gets underway at 8 a.m. Then at 2 p.m., the individual market hog event starts, followed by the truckload show and Hog College Home Run Drive.

The NBS Junior Classic, which has about 498 entries, is a junior competition featuring exhibitors under the age of 21 and sometimes as young as four. Junior competitors come from mostly the Midwest but also from Texas and Oklahoma.

The World Series of Swine Shows will attract many of the top college judging teams. About 400 college, 4-H and FFA students from throughout the United States, including California, Texas, Georgia, Ohio and West Virginia, will compete for top honors in the judging contests.

There will be two divisions in this competition, a university division as well as a community college division. The students will be scored based on the accuracy of their judgment in comparison to that of professional judges. These students have a range in majors of animal science, agricultural economics and pre-veterinary studies.

Hog college row is a competition in which the most formidable boar and gilt from each of the eight breeds is judged by an audience consisting of college judges.

The Breeding sale will be held on Wednesday and will be an Auction of the hogs in which are meant to be bred.

The barrow show had 598 entries as of last week, but organizers expect more entries by the beginning of the show.

For more information about the show schedule and exhibiting, contact the specific breed office at the following websites: National Swine Registry at www.nationalswine.com; American Berkshire Association at www.americanberkshire.com; and Certified Pedigreed Swine at www.cpsswine.com.

5 p.m.: All junior market hogs and junior breeding gilts must be on the grounds, checked in and market hogs must be weighed

Noon: All open show breeding stock, truckloads and open market hog show entries must be on the grounds