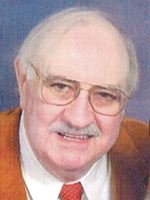 He was born Nov. 3, 1933, in Austin, Minnesota, to William and Beatrice Kimlicka.

David graduated from Austin High School and joined the Army in 1952 and was stationed in Germany for two years. He is a life time member of the Nisswa American Legion Post No. 627. David retired after working 30 years with the Hormel Company in Fremont, Nebraska. While living in Fremont he met the love of his life, Cecil Bero. They married in May, 1981. After retiring they made their home in the Brainerd Lakes area.

He is survived by sisters, Charlotte (Harry) Christiansen, Barbara Thompson and brother-in-law, Nels Christiansen; and many nephews and nieces, cousins and friends.

Mass of Christian Burial will be held 11 a.m. on Friday, Sept. 30, 2016, at Immaculate Heart of Mary Church in Crosslake, Minnesota, with visitation beginning one hour prior to services at the church. Burial will be held at Greenwood Cemetery in Nisswa with military honors by Nisswa American Legion.

Arrangements are with Nelson-Doran Funeral Home.