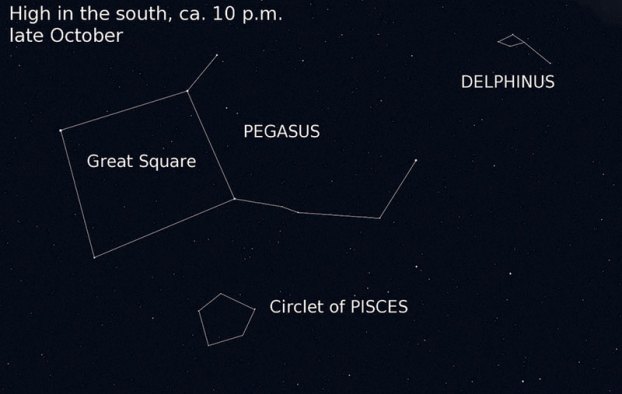 As skies get darker Mars holds sway over the night skies

With darkening skies but not yet the winter cold, October is ideal for watching stars and planets.

Mars holds its own in the south-southwest all month long, even as the stars of Sagittarius sweep by it and the Red Planet’s former companions — Saturn and Antares, the heart of Scorpius — head into the sunset.

Look to the southwest on the 27th, about 40 minutes after sunset, to see Saturn, Venus and Antares lined up in that order top to bottom. Antares is a gigantic red star, but you will need binoculars and a clear view of the horizon to find it.

On the 3rd we’re treated to a nice pairing of Venus and a young moon in the early evening sky. Look in the west-southwest about half an hour after sundown to see Venus glimmering below a three-day-old crescent. On the morning of the 28th, look eastward about 40 minutes before sunrise for an old moon in an equally lovely pairing with Jupiter.

Whenever no moon interferes, grab a star chart and look for the fall stars and constellations. Start with the Great Square of Pegasus, now riding high in the southeast after nightfall. Just to the west, enjoy the leaping form of little Delphinus, the dolphin. And below the Great Square, the Circlet of Pisces is always fun to find. Farther south you’ll see Aquarius, Capricornus and a lone bright star—Fomalhaut, in Piscis Austrinus, the southern fish.

On Halloween we celebrate an astronomically based Celtic holiday, one of four “cross-quarter” days falling midway between an equinox and a solstice. Halloween began the dark half of the year; at sunset on that day, evil spirits came out of exile to torment humankind for six months. People put out treats of food to appease the spirits, and lanterns made from gourds to ward them off. Those practices survive in our rituals of trick-or-treating and lighting jack o’lanterns. The spirits stuck around until sunrise on May Day, when they were again banished for six months.

It seems like the majority of us have busy schedules, which is why Hy-Vee offers a variety of services to... read more