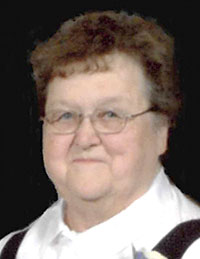 Arlene Marie Ross was born June 26, 1927, in St. Peter, Minnesota, the daughter of Carl and Edna (Rydeen) Ross. She received her teacher’s certification from Gustavus Adolphus College. Arlene lived on her parents’ dairy and crop farm until she moved to teach school in Montana. After leaving Montana, Arlene moved to Le Sueur, Minnesota, as an office manager for the Green Giant Canning Company.

On Nov. 2, 1946, Arlene married Virgil Anderley in Le Sueur. This November would have been their 70th wedding anniversary. Their union was blessed with seven children: Jerry, Dianne, David, Robert, Joan, Dennis and Lisa. The couple moved to Austin where they met their dear friends Dick and JoAnn Tufte. They remained best friends for 61 years. The foursome had some great times and have stories that will be told forever. She and Virgil had fun no matter what they did, traveling, fishing, taking car trips anywhere, taking gambling trips, and going out to dinner. They enjoyed each other’s company and enjoyed each day they were able to share together. Arlene gave her time to many organizations, including to schools as a volunteer, Missouriwer County Cancer Society (president), Tops Club (secretary), Pat Piper’s volunteer program, “I Can Cope” cancer program, Cub Scouts, Girl Scouts and many others. She was generous with her time and passion, she loved her family, and was devoted to her friends. Those fortunate enough to call Arlene their friend were truly blessed, as she was always loyal. She had an infectious laugh and an incredible outlook on life. There were numerous illnesses and setbacks that would have crushed most peoples’ spirits, but Arlene had an incredible will to live and shine. She never gave up on life, and made the most of every day. Arlene will be dearly missed by all who knew and loved her.

Mass of Christian Burial will be held at 2 p.m. on Friday, Sept. 9, 2016, at Queen of Angels Catholic Church. There will be a visitation from 4 to 8 p.m. on Thursday, Sept. 8, at Worlein Funeral Home in Austin, and one hour prior to the service at the church on Friday. Interment will be in Calvary Cemetery. A prayer service will be held at 7:30 p.m. Thursday night.