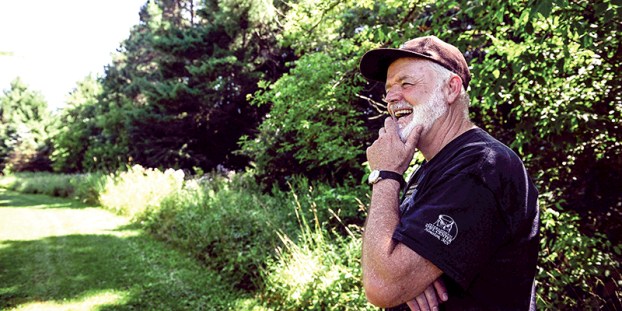 A walk with Larry; Dolphin is leaving the Jay C. Hormel Nature Center better than he found it

Editors note: You can find the entirity of this story in the September-October edition of Austin Living Magazine.

On a sunny day in late July, Larry Dolphin crouches down and walks in the center of a canoe on the shore of the Jay C. Hormel Nature Center pond as he gives instructions to eight students in the Summer Adventure Program on the proper way to stay balanced when entering a canoe — and on the way not to enter enter and exit a canoe.

As he finishes his instructions, Dolphin shares a story about he and a past canning partner’s misadventures. 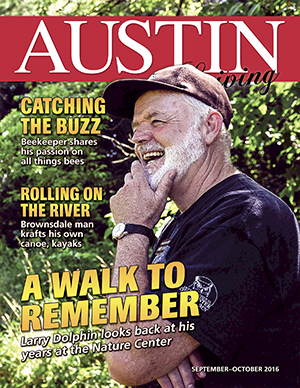 “I was showing them how to do this and I ended up jumping into the water head first,” Dolphin said with a laugh.

Dolphin, 64, was preparing the eight youngsters in fifth and sixth grades to depart on a two-day camping trip the next day — a trip he’d later describe as a wonderful experience with a great group — to canoe on the Root River, visit Mystery Cave, and camping at the state park with a long bowling night hike to go owling.

Though the trip would be one of Dolphin’s final big events in his 28-year tenure at the nature center before he retired on Aug. 31, Dolphin went about his work as if it was just about any other day.

Dolphin stepped back and let the children get their canoes in the green-colored pond water.

“Can you guys can handle it the rest of the way? I want to see you use the proper technique,” he said to two youngsters.

As Dolphin approached his last month at the job he’s held since 1988, Austin Living met up with Dolphin for an hour-plus hike to the to the nature center’s tower to reminisce with Dolphin about his career as director/naturalist.

“It’s a job that I loved to do,” he said, after thinking a few moments, he adds: “I don’t know what else I would have wanted to do, so I’m very fortunate.”

‘Better than we found it’

As Dolphin walks some of the nature center’s 10 miles of trail, he’s quick to point out birds singing across the many acres of meadow and forest. At one point, he hears a call that he describes as a potato chip and then a dip in the song.

“That bird right there, that common yellowthroat,” Dolphin said. “A lot of people don’t realize it, but it’s probably the most common bird in the nature center, and it’s got a black robin’s mask, yellow throat and it sings, wichity, wichity, wichity.”

He pauses, listening a moment.

That lesson was just one example of how Dolphin has lived his passion at the nature center for 28 years: He’s worked to connect countless students, adults and families to nature and help them learn about it. And as he tells students, it’s far better to witness animals and the natural world in person than on television or a computer.

“There’s this passion to leave this place better than we found it, the Earth or the nature center for that matter,” Dolphin said. 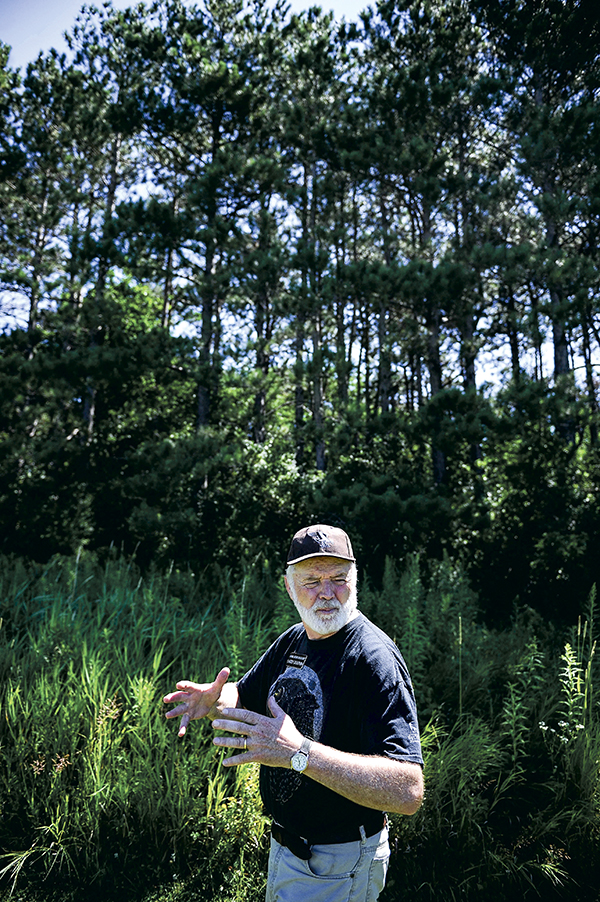 Jay C. Hormel Nature Center naturalist Larry Dolphin talks about his time at the center as he walks past some of the pine trees that populate the land. Eric Johnson/photodesk@austindailyherald.com

Caring for the world, Dolphin says, benefit people as well as all life.

“As human beings, we are part of, not separate from the natural world,” he said.

“We are connected to everything else, and this planet provides all that we need, so we need to make sure we take care of the wildlife, the air, the soil,” Dolphin said.

But it’s not just summer programming, as thousands of area students have traveled to the nature center for field trips over many years, largely for kindergarteners through seventh-graders.

Dolphin sees it as a paramount duty of the nature center to give families and children the opportunities to witness the natural world.

“There’s a passion that I have and that is to help people get connected to our natural world,” Dolphin said.

Growing up in Livinston, Wisconsin, Dolphin recalls a love of nature, sparked in the hill country, that led to him to seek a bachelor’s in natural resources/resources management, a minor in biology and a master’s in environmental/conservation education from the University of Wisconsin-Stevens Point. After working various environmentalist and naturalist jobs, he went back to school to work toward his teaching degree but wound up working as a naturalist in Clinton County, Iowa, and the as a park manager in Blackhawk Lake Recreation Area in Wisconsin. That’s when Dolphin interviewed in Austin and was hired, as he often says, because he emphasized his love of teaching.

“My comment one of my fellow employees was, ‘I think I’m going to want to be here for a while.’ I was impressed,” Dolphin said.

At the nature center, Dolphin gets to teach children, adults and help manage the land. He’s also enjoyed directing the center and helping lead its programing.

“I look at it as a place that people can get connected to the natural world through many different ways, through activities like canoeing or cross country skiing or walking or running or just nature photography, bird watching, astronomy — we do all of that through the nature center programming,” Dolphin said, noting many of those activities are also his own hobbies. 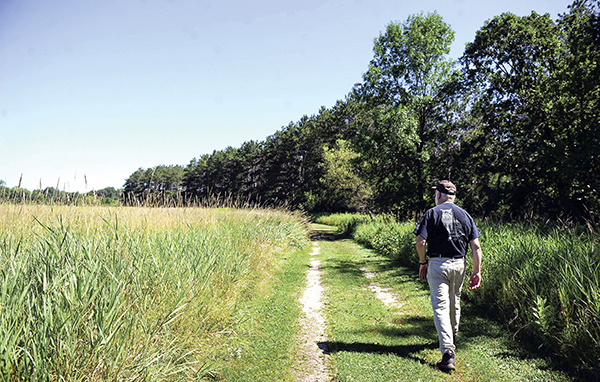 Jay C. Hormel Nature Center naturalist Larry Dolphin takes a walk through the center from where he recently retired from. Eric Johnson/Austin Living

‘If you build it they will come’

But when talking about the nature center’s work, Dolphin is quick to point at others’ contributions, like office manager Julie Champlin, teacher/naturalist Maria Anderson, intern/naturalist Ben Sherman and summer intern Jacob Berkhart.

“A real conscientious, positive staff that believes in this place, and by doing that, it makes my job easier. “he said. “Thy want to do the best for the nature center.”

Dolphin has also worked with numerous interns over the years, which he calls one of his favorite parts of the job along with teaching youth and adults.

“They help keep me young and plus that enthusiasm that comes with that youth is always just wonderful to grab onto,” he said.

That work is paying off, as one of his former interns is returning to fill his shoes. The nature center hired Austin native and former 2005-06 intern Luke Reese as the new director/naturalist.

Reese was slated to spend a few days working Dolphin learning more about the nature center, but as Dolphin walked through the land he’ll soon pass over, he has succinct advice for Reese: The important thing is to keep the programming going strong with the funding available.

“That will bring people out here so that they can use the nature center, appreciate it, be willing to take care of it, understand it,” he said.

Dolphin also commended the Friends of the Jay C. Hormel Nature Center, the Austin Parks & Recreation board and the Austin City Council for support over the years.

One way those boards have been supportive is through help with acquisitions. The nature center now has 518 acres, up from about 287 when Dolphin started in 1988. And the center was able to get local board support and apply for grants.

“They understand the value of this place, and it’s unique in that for the size of community of 25,000, not many places have a wonderful natural area like this to enjoy,” he said.

By having more habitat, the center has expanded it’s mouse and vole potential, which means more opportunity for owls, hawks and fox to eat.

“I feel really good about the fact that we’re providing more habitat for wildlife, for birds,” he said. “There are birds here that weren’t here before: dick thistles, clay-colored sparrows, Savannah sparrows.”

Dolphin points out to an example of that on the north end of the center, where a 60-acre parcel of a former corn and soybean field has been restored to natural prairie around 2004.

As he looks over the meadow, Dolphin points out an example of the benefits of that habitat.

“I just heard a dickcissel out there,” Dolphin said. “If you build it they will come.”

The Austin City Council has a busy night ahead on Tuesday. The council will meet for its regularly schedule meeting... read more