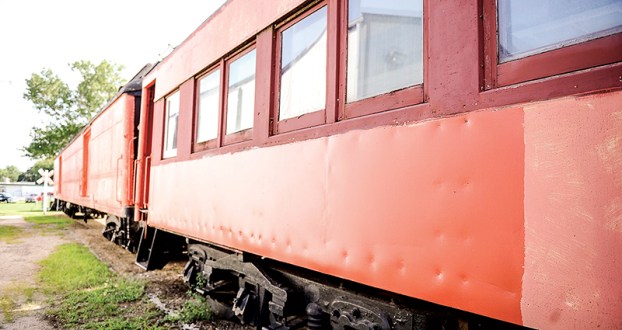 A quick coat of paint is applied to one of the train cars that was vandalized earlier this week. -- Eric Johnson/photodesk@austindailyherald.com

When John Haymond began preparing for fair week, he did not expect removing graffiti to be on his to-do list. However, the passenger and caboose trains, along with the train depot, at the Mower County Historical Society were vandalized Sunday evening, leaving graffiti tags on the historical pieces.

“I was not happy [when I saw the damage],” said Haymond, MCHS’s executive director. “It’s damaging historically relevant property.”

Haymond first noticed the graffiti when he came into work Monday morning. The words “Litfox” and “Freak” were painted on the side of the trains, which is a familiar tag seen in Austin.

“One of them is around town,” he said. “Anyone who uses bike paths will have seen it. They’re fairly familiar graffiti tags.”

Not long after his initial discovery, Haymond started working on a temporary fix for the damage.

“It was less than 24 hours before the fair starts,” he said. “I was in reaction mode.”

He started with some cosmetic repairs of the trains for the time being. The paint that was last used on the trains was purchased for minor touch ups because scrubbing didn’t remove the graffiti.

“It’s not perfect, but it’ll get us through the week,” Haymond said.

This is not the first time trains at the MCHS have been the target of vandalism. Last summer, MCHS staff discovered someone had broken a few windows on the Milwaukee Road train car housed on historical society property.

A few weeks after, someone snuck into the Mower County Fairgrounds, threw more bits of rock and cornet at the train and broke several more windows. It appeared someone had stood and repeatedly smashed a large, round pane of glass toward the front of the train car. Some of the rocks broke the train’s original blinds as well.

“[The graffiti] isn’t as bad as that, but it’s almost as incinerating in a way,” Haymond said.

There are no suspects at this time but if someone is found to be the vandal, they could be held for $6,000 worth of damage because the train depot was professionally painted and washed recently.

MCHS was originally planning to upgrade its security system, which would hopefully be installed in the next few weeks, according to Haymond. The new system would possibly include security cameras as well.