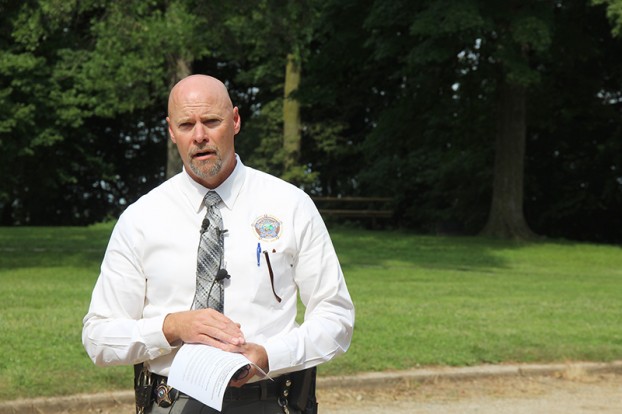 The man killed Tuesday night at Myre-Big Island State Park was reportedly found in a locked vehicle in a parking lot near the Big Island pavilion, according to authorities.

The windows and sunroof of the Volkswagen station wagon were closed when the man was shot twice in the head, and the car was in reverse at the time it was found, said Freeborn County Sheriff Kurt Freitag.

Freitag said the identity of the man, who is described as white and in his early to mid-20s, is expected to be released Thursday morning, along with the name of the suspect arrested on suspicion of second-degree murder. 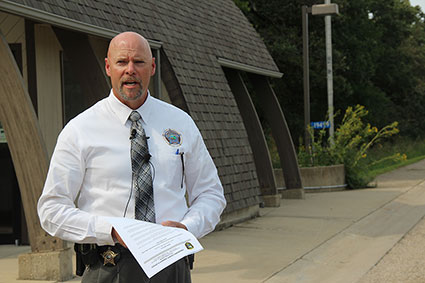 Freeborn County Sheriff Kurt Freitag said the suspect arrested in the death of another man on Tuesday night reportedly called 911 to report the shooting at Myre-Big Island State Park. The suspect met authorities at the ranger station at the park, approximately 1.7 miles from where the shooting occurred on Big Island. — Sarah Stultz/Albert Lea Tribune

The suspect — whose name has not been released — is claiming self-defense in the man’s death. He alleged that the victim had approached him with a bat.

The suspect reportedly called 911 at about 9:15 p.m. Tuesday and reported he had shot another man at the park.

Freitag said the suspect met authorities in a 2015 Ford F-150 at the ranger station near the park’s main gate — about 1.7 miles northwest of the pavilion on Big Island — and he was taken into custody without incident. The gun allegedly used in the shooting was also recovered.

When authorities arrived at Big Island, they reportedly found the victim had been shot two times in the head as he was sitting in his car. They did not find a bat, Freitag said, but did find a golf club.

The sheriff said the suspect and his wife and 4-month-old child were using the park’s pavilion and had a small recreational fire. The suspect apparently made contact with the victim, before the victim left, then returned.

Freitag said it is unclear what led to the shooting.

The suspect’s wife and infant child were present, but not injured. The sheriff said the woman reportedly heard fired shots but did not witness the shooting. She was interviewed by law enforcement and released.

No other people or vehicles were in the parking lot at the time of the shooting.

The victim and suspect had reportedly been living in Freeborn County since May. They reportedly had recent ties to Omaha, Nebraska, and did not have extensive criminal records.

The suspect did not have a Minnesota concealed carry permit.

Freitag said the suspect is expected to be charged Thursday. The charge could later be changed to first-degree murder, depending on if premeditation is established.

More information about the shooting victim is expected to be released once a preliminary autopsy conducted by the Ramsey County Medical Examiner’s Office is completed. 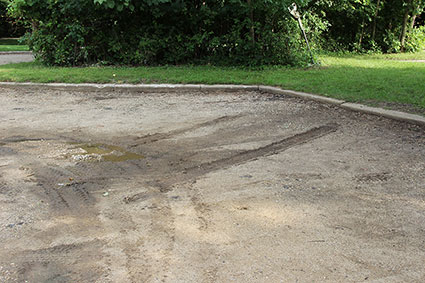 Albert Lea resident Scott Hanna — who was hiking with his wife, Stacy, in the park Wednesday —  said a homicide is an unexpected tragedy in the community.

“It’s awful,” Hanna said. “It’s not something you expect in a community like this, especially in an area like this which is a place you go to relax.”

Stacy Hanna said they visit the trail often, and she hopes the incident does not hinder people from using the state park.

Tim and Bonnie Klein of Maplewood were camping at Myre-Big Island State Park Tuesday night south of the pavilion and parking area where the shooting occurred.

“We leave the city to get away from the violence,” Tim Klein said.

The Kleins planned to stay at the state park until Thursday.

“It happens where you always think it won’t, and it always does,” Bonnie Klein said. “And that’s the sad part about what we’re living in.”

Mark and Roni Zuber of Arden Hills were also camping at a site near the pavilion when the shooting occurred.

They described hearing what they thought were fireworks the night of the shooting.

“You always feel like there is nothing that is going to happen in the park,” Roni Zuber said. “Very odd.”

With the annual ArtWorks Festival happening this weekend and lots of different music groups coming to town, there will be... read more