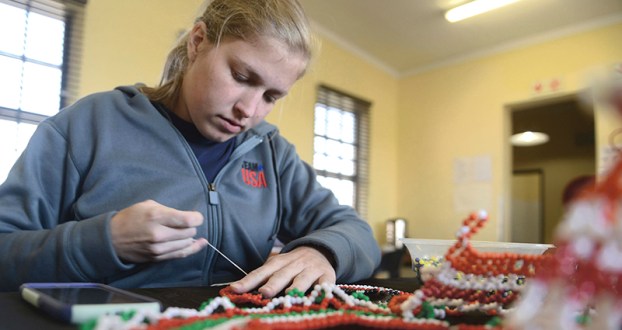 Austin native Lila Johnson works during the 2016 Diepsloot Community Plumbing Challenge in July in Johannesburg, South Africa. Launched in India in 2015, the initiative aims to improve the living conditions of people in marginalised communities. Johnson, a 2012 Austin High School graduate, is a a Milwaukee School of Engineering graduate student and Team USA member focusing in environment/civil engineering. -- Photos by Lefty Shivambu/Gallo Images

Tackling a challenge; AHS grad competes in challenge to improve quality of life

While everyone watches Team USA in the Olympics, another American team — of plumbing apprentices, college faculty and engineering students, including 2012 Austin High School graduate Lila Johnson — has quietly scored points in a South African event aimed at improving the quality of life in an impoverished community.

Teams from the U.S., Australia, India and South Africa attempted to improve the public restroom system in a sprawling slum of about 500,000 people, where raw sewage flows in the streets and the tin-roof homes don’t have toilets and running water.

The goal was to create a model for a single-stall restroom, like the ones used at sporting events and construction sites, but capable of withstanding the rigors of hundreds of flushes a day.

Johnson, an Austin native, called it a once-in-a-lifetime experience. 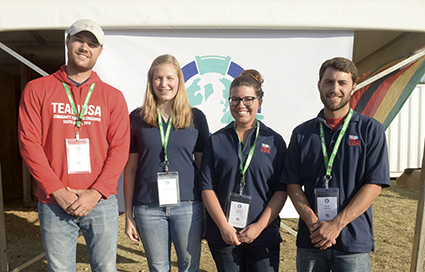 “I would go back again because it was a beautiful and amazing experience,” said Johnson, a Milwaukee School of Engineering graduate student and Team USA member focusing in environment/civil engineering. She plans to graduate next May.

Some of the public restrooms in the community, known as Diepsloot, have been out of service for a long time. Plumbing parts and fixtures have gone bad, or the facilities are no longer working because of vandalism and theft of the metal pipes.

“The toilet we fixed hadn’t been working for four years,” said Tyler Zeh, one of the Fox Valley Tech plumbing apprentices.

Diepsloot, on the northern edge of Johannesburg, is more like a refugee camp than a planned community. Most of the homes lack piped water or electricity, so people wash at the public restrooms. Sanitation facilities are sketchy, at best.

Randy Lorge, a Fox Valley Tech plumbing apprenticeship instructor and one of the Team USA coaches, recalled seeing raw sewage flowing down the streets, dead rats, and barefoot children playing in the filth.

There were approximately 700 public toilets, for tens of thousands of people, in the section of Diepsloot addressed by the Community Plumbing Challenge. Many of those facilities were broken, and it could take years to make much of a dent in the overall problem.

“Still, if we change even one person’s life, then everything we did was worth it. Kids were smiling, and parents were so excited to see their toilets reinstalled and working,” Lorge said.

The teams were asked to design a better, more durable public restroom that could be retrofit into the existing units. On-site repairs are difficult because of the scarcity of electricity and tools in Diepsloot.

Team USA created a modular plumbing system that can be removed and taken to a service facility for maintenance and repairs. Also, with the modular system, it’s easier to replace a broken piece on site.

Diepsloot doesn’t have much money, so the public toilets there are cheap and not very durable.

These units weren’t meant to be flushed hundreds of times a day, said Doug Nelson, a Milwaukee School of Engineering assistant professor and a Team USA coach.

Team USA paired engineering students with plumbing apprentices, all from Wisconsin, in order to capture the best ideas and experiences from both perspectives.

“The plumbers really helped with the design. What’s really cool is you have these young people, just starting their careers, learning to work together and seeing each other’s side of things,” Nelson said.

The trip to Diepsloot in July gave the students a better understanding of the problem.

“We could design a toilet facility that would work well in the United States but wouldn’t work there,” Johnson said.

There was an element of competition to the Community Plumbing Challenge, since the teams representing the four nations came to Diepsloot with different ideas for solving the problem, and they all sought to have the best design for the public restrooms.

The results of the work will be released in September at the World Plumbing Conference in Cape Town, South Africa.

Johnson said her favorite memory from the trip was on the last night when people of all ages gathered together to celebrate in a farewell ceremony. Johnson described the night with every one dancing and being comfortable around everyone.

“The biggest thing I would encourage is that everyone experience something like this,” Johnson said. “This was a [once in a] life time experience. I really grew as a person.”

Students said it didn’t seem like a competition, though, because of the camaraderie they experienced with the other teams and the interaction with the Diepsloot residents. They all learned from each other, and learned more about plumbing and the culture in Diepsloot.

Community Plumbing Challenge, in its third year, was founded by the International Association of Plumbing and Mechanical Officials. 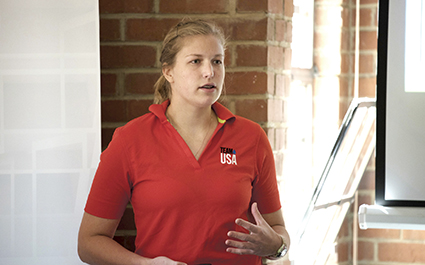 “The idea is to send some of the most talented apprentices and students to experience and tackle a particular need or problem in a disadvantaged community. We would like to continue developing the Diepsloot project, looking at how best to expand on what’s been done for years to come,” said Sean Kearney, an international project manager for the association.

Plumbing is a huge concern globally, with about one-third of the world lacking adequate systems and facilities. In India, for example, the United Nations estimates that more than 600 million people don’t use toilets. And while significant improvement has taken place over the last 20 years, an estimated 1 billion people worldwide still practice open defecation, while another 700 million use unhygienic facilities.

Estimates of annual deaths from diarrhea, the majority of them spawned by feces-contaminated water, range as high as 1.5 million. Most of the victims are under 5 years old.

Kohler Co., one of the world’s largest manufacturers of plumbing products, has teamed with California Institute of Technology doctoral students in an effort to design a better toilet, to improve sanitation for the poor in rapidly urbanizing countries such as India.

The problems won’t be solved quickly, if at all, and the Community Plumbing Challenge efforts might seem like a drop in the ocean.

Still, “we have to start somewhere,” Kearney said, and bringing awareness to the problems through young people will create momentum that could last for years.

“We are just trying to make our contribution the best we can,” he said.

That message resonates with the Team USA members, including Zeh.

While in Diepsloot, he saw barefoot kids playing where a drain was plugged and raw sewage overflowed into the street.

“We unclogged the drain and fixed one of the leaks. Even if that just helps those kids, I think we accomplished something,” Zeh said.

—The Austin Daily Herald’s Jora Bothun contributed to this report.

The Packer football team is three days into practice and it’s already got its mind on turning things around this... read more