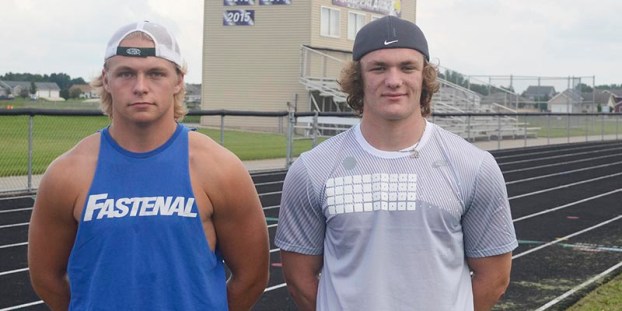 Grand Meadow’s Zach Myhre and Christophor Bain are expected to bring plenty of punch to the lineup for the Superlarks as they pursue their fourth straight nine man state title this fall. Rocky Hulne/sports@austindailyherald.com

GRAND MEADOW — If you are going to rattle off three state football championships, you can’t be afraid of a little contact. Grand Meadow bruisers Christophor Bain and Zach Myhre are already starting to anticipate the first hits of the 2016 football season, which begins when teams begin practice Aug. 15.

Bain, who will be a senior this fall, and Myhre, who will be a junior, both play running back and linebacker for the Superlarks, who have won 36 straight games and three straight Class nine man state titles. 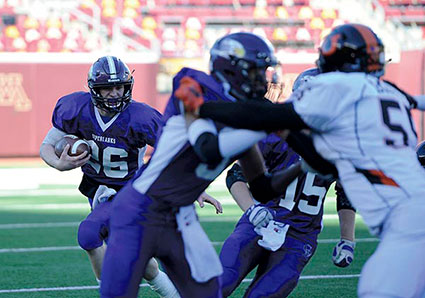 Bain grew up as the youngest of four siblings who all played football for GM and he sometimes had to fight off some good natured jabs from his older brothers. Now he’s taking his turn as the instigator as he’s been a major physical force for the Superlarks.

“It’s not fun if you don’t hit anybody,” Bain said.

Myhre doesn’t have any older brothers, but he plays the game almost identical to Bain’s style. In fact, Myhre is often motivated to make a big play of his own when he sees Bain make an impact play.

“You talk with your shoulder pads,” Myhre said.

It was Myhre who scored the go-ahead TD in last year’s state championship victory over Underwood and that gave GM its 36th consecutive win. All of the winning hasn’t grown old for GM, but it has put a little pressure on them.

Bain said that it helped to play in some close games last season, and the Superlarks want to continue their winning ways this season.

“We don’t want to be the ones to end this streak we’ve got going,” Bain said. “That would be awful. We have to take it one game a time.”

Myhre agreed that the Larks shouldn’t be content to rest on their past accomplishments.

“What we did was pretty great and not too many people get to experience that, but you’ve always got to stay hungry and want more,” Myhre said.

It’s no secret that Bain and Myhre are going to play even bigger roles for GM this season after the team graduated quarterback Michael Stejskal. Bain and Myhre put in a lot of time in the weight room in the offseason and head coach Gary Sloan is excited about their potential as a duo.

“These two are kind of the key for us,” Sloan said. “We’ve got a really strong backfield coming back and they do a great job in the weight room of setting an example for everybody else.”

Sloan said GM played its best football when it was playing from behind last season and he’s pleased with the mental toughness his squad has built up. He’s hoping the Larks can stay focused on the task at hand this season and not lose their focus. 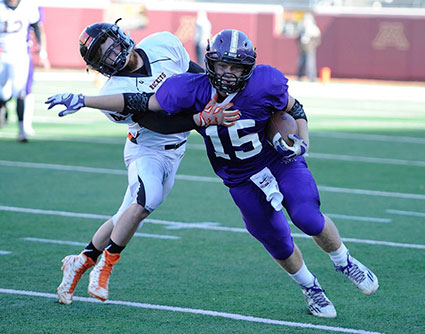 “I think the time to sit back and enjoy it is about over now,” Sloan said. “We know that everybody in the state wants to be the one to beat Grand Meadow and end the streak. We know that’s going to happen, but we want to try and delay that as long as we can.”

Bain still gets pointers from his older brothers and Josh Bain, who played football at Hamline University along with his twin brother Justin Bain, is coming on to help coach the Superlarks this fall after serving as Albert Lea’s defensive coordinator in the past. Richard Bain joined the Marines after high school.

Christophor would also like to play college football like his older twin brothers and he’s drawn some interest from a couple of Division I FCS schools.

“I learned a lot from watching [my brothers],” Christophor said. “Through the years, they’ve helped with what I’ve been doing wrong and they’ve watched film with me on Saturday’s after games. They tell me I’ve missed this tackle and did this wrong.”

GM’s season will officially kick off when it hosts Lanesboro 7 p.m. Sept. 2.