The Oakland Place Southeast bridge at the southern end of East Side Lake. Herald file photo.

Oakland Place bridge set for replacement; Project to start in October, last through May 2017

One of the largest Mower County bridge replacement projects in recent years is moving forward after getting unanimous approvals from the Mower County board and Austin City Council this week.

The Oakland Place Southeast bridge, which spans Dobbins Creek on the southern end of East Side Lake, will be replaced starting in October after the City Council voted Monday and Mower County board voted Tuesday to approve the various aspects of Icon Construction LLC’s roughly $2.6 million bid for work on the project.

The county has long looked to secure funding for the project and was promised about $1.75 million in state bonding funds toward the more than $2 million in basic costs for the bridge replacement.

Construction is slated to start Oct. 27, if not sooner, and will last through May 2017. The bridge will be closed for the duration of the project. 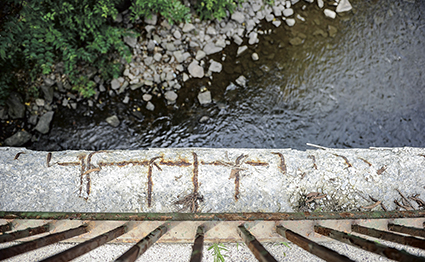 Rusted rebar is visible on the Oakland Place Southeast bridge just off the East Side Lake dam Tuesday.

Though winter road construction is a bit rare, Hanson told the board it likely didn’t affect the bids much.

The plan is to complete work by the end of May because the 11th Place Southeast bridge over Interstate 90 near the 1509 10th Place NE Kwik Trip is slated to be replaced starting in June 2017.

“The state didn’t want to shut that down at the same time,” Hanson said.

The Oakland Place project will include a 52-foot bridge, a 10-foot sidewalk on the north side, a 6-foot sidewalk on the south side, roadway approaches, decorative lighting, improvements at the Oakland-14th Street intersection and retaining walls between the bridge and the East Side Lake Dam.

The Oakland Place bridge will also be constructed with some additions brought forward by Vision 2020 as part of its Visual Quality Manual, which is the Gateway to Austin Committee’s plan to beautify bridges on key roads in Austin. In February, the county board unanimously voted to move forward with $289,000 of $437,000 in requested project additions.

The county will cover $100,000 to widen the bridge to make room for the 10-foot wide bike/walking path and $30,000 for additional lights. But the board did not include $112,000 for architectural surface treatments and $29,000 for an ornamental railing.

The bridge, built in 1932, is one of the oldest in the county and has long been deemed structurally deficient. After replacing the Oakland Place plans, the county is looking to replace several other bridges built in the 1930s and one built in 1926 as part of a capital improvement plan outlining projects that would be completed if the county stops a half-cent sales tax for infrastructure projects. The Oakland Place project is not tied to the half-cent sales tax.

The county handles all bridge projects in the county — including on city and township roads — based on a more than 100-year-old standard.

Residents and developers building homes or apartments in Austin and much of Mower County can now apply for a five-year... read more