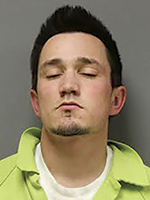 ALBERT LEA — An Oakland man pleaded guilty Monday in Freeborn County District Court to selling a simulated controlled substance to an informant in 2014.

Court documents state that on Oct. 31, 2014, members of the South Central Drug Investigation unit coordinated a purchase of methamphetamine from Angela Sanchez.

A confidential informant who had previously bought meth from Sanchez said she would sell 7 grams of meth for $540.

The confidential informant made contact with Sanchez in the area of her home with Hockinson present, court documents state.

The informant reportedly told a Freeborn County Sheriff’s Office deputy and other agents that money was delivered to Sanchez before Hockinson left to get the meth. When Hockinson returned, Sanchez reportedly handed the money to him.

A field test of the suspected meth was negative, court documents state. Formal testing at the Bureau of Criminal Apprehension revealed a result of a little more than 6.6 grams, which contained no controlled substance.

Hockinson was originally also charged with second-degree meth sale, but that charge was dismissed.

Sanchez was originally charged with second-degree sale of meth and sale of a simulated controlled substance, but those charges were dismissed, according to the Freeborn County Attorney’s Office.

Selling a simulated controlled substance carries a maximum sentence of three years in prison and/or a $20,000 fine.

GLENVILLE — A girl was injured Wednesday after being trapped under an ATV near Glenville. The 14-year-old — whose name... read more