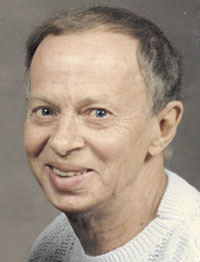 He was born Feb. 28, 1936 in Black Hammer Township, Houston County, Minnesota, the son of Nervin and Agnes (McMillan) Skauge. Norman lived in Spring Grove, Minnesota until his family moved to Austin.

Norman attended school in Houston County and Austin before enlisting in the U.S. Air Force in March 1953. Following his honorable discharge in December 1956, he continued to serve in the reserves until 1961. He married his high school sweetheart, Peggy, years later in 1976, but was later divorced. He remained madly in love with her until death. When he was diagnosed with terminal cancer, his reply was “I am ready to be with Peggy again.”

He was known for his sense of humor by his family, friends and co-workers. Norman was often mistaken for Don Knotts in his early years and later mistaken for Willie Nelson when he grew out his hair after his retirement from Progress Casting in 1999. Norman had nine lives, surviving a horrible car versus semi accident with his step-son, Cecil, returning home from work at night in the 1980’s, as well as a motorcycle accident in his youth and other minor car accidents. Norm was the biggest Minnesota Twins fan and knew statistics about many past and current players and a baseball fan in general. He was also a fan of PGA golf and loved to fish with his buddies.

Graveside services will be held at 1 p.m., Friday, Aug. 26, 2016, at Grandview Cemetery Columbarium with Military Honors by American Legion Post 91. A reception will follow the burial at the Salvation Army. The Skauge family would like to thank the staff at St. Mark’s Lutheran Home and Heartland Hospice for their loving care, the Salvation Army for the use of their facility, and the Veterans Administration for their commitment to veterans in nursing homes. Memorials may be directed to the Salvation Army of Austin or to the Skauge family. Services prearranged and performed by Worlein Funeral Home of Austin. Condolences may be expressed to the family online at www.worlein.com.