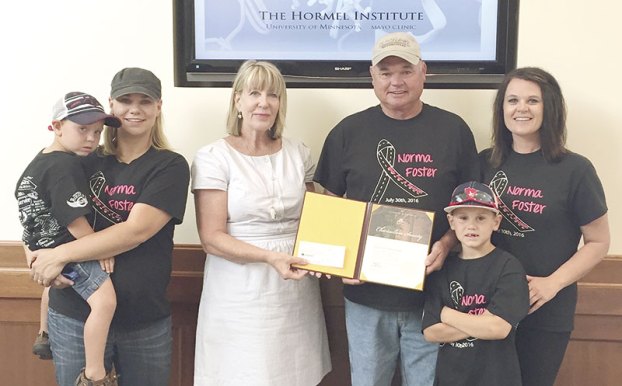 The fifth annual Norma Foster “Ride for a Reason” took place July 30 and donated $21,600 to The Hormel Institute in Austin. The ride takes place yearly in northern Iowa and The Hormel Institute has been the recipient of donations raised during the event for the past three years. Photo provided

More than 250 participants including 100 motorcycles and classic cars gathered in northern Iowa this month, leading to a record $21,600 donation for cancer research for The Hormel Institute, University of Minnesota. As always, 100 percent of the donation goes to research.

“That is very important to us, that all of the money goes directly into research,” said Dean Foster, husband of the late Norma Foster, in a press release. “That was a main reason why our family chose to partner with The Hormel Institute.”

Family members who organized the fifth annual Norma Foster Memorial “Ride for a Reason” out of Riceville, Iowa, presented this year’s gift — a record amount for the fundraiser — this past week to The Hormel Institute. It was the third-consecutive year that “Ride for a Reason” funds were dedicated to support The Hormel Institute’s world-renowned research into better ways to prevent, detect and control cancer.

Every July since 2012, “Ride for a Reason” has honored the memory of Norma Foster, a Riceville, Iowa, resident, who died in 2011 at age 55 following a two-year battle with breast cancer.

“Our family is grateful to the community that comes together year after year to honor an amazing and wonderful woman,” Dean said in the release. “If our efforts, and the money we raise, can save just one person from cancer it’s all worth it.”

This year’s “Ride for a Reason” on July 30 drew about 250 participants who rode motorcycles, classic cars or rode in a bus decorated with pink ribbons and inspirational messages. The nearly eight-hour trip started in Riceville and covered nearly 100 miles through numerous towns in the northern Iowa area where Norma grew up and lived. The ride then returned to Riceville for a dinner and auction.

As with any gift to The Hormel Institute, 100 percent of the “Ride for a Reason” funds will directly support cancer research.

The Historic Paramount Theatre and Artworks Center will have a mix of new events and returning acts to keep Austin... read more