Austin is ready to unveil new signs for the times.

The signs will be large, giving motorists plenty of change to see them. The city increased the size from 3 by 2.5 foot signs to 4.5 by 3.3 feet. 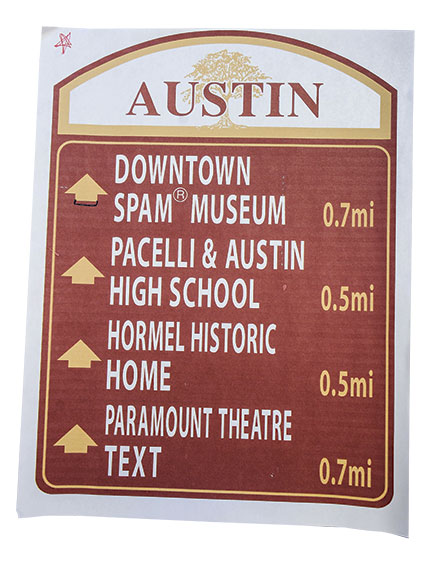 “We’ve increased it considerably to make sure that the traveling public can see it,” Lang said. “Give them plenty of lead time before they get right up on the sign, then it’s too late and they can’t read all the different destinations that are on there.”

Lang admits the signs look large initially, but they’ll be posted about 7 feet high and will be reflective to increase visibility.

Vision 2020’s Gateway to Austin Committee first brought the idea for the signs to the city of Austin as part of a plan to beautify Austin roadways.

The work is being done by Innovative Signs, which bid $32,513 for the work, which was within the project budget of $45,155 with the money coming from The Hormel Foundation.

The signs keep with the theme and style of the group’s planned future bridge replacement projects along Interstate 90.

Lang expects to get 15 of the signs up this year and 12 of the concrete foundations are already in place.

The final three signs should go up next year, including a few along Highway 105.

The city is also working with Vision 2020 on two new Welcome to Austin signs installed closer to the Oakland Avenue and 28th Street Northeast exits along Interstate 90, as well as a sign on U.S. Highway 218, which replaces the one on Jay C. Hormel Nature Center property.

The Austin Greyhounds undertook a major youth movement this summer and it has paid off for them. After missing out... read more