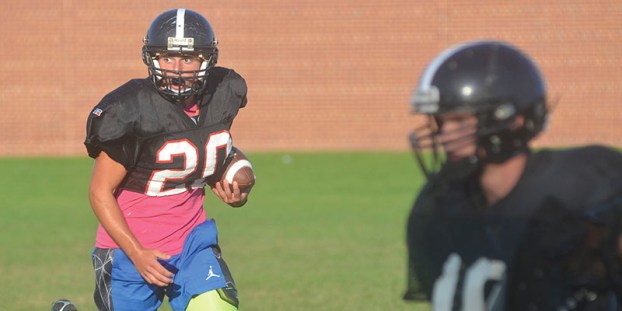 Max Romeo carries the ball for the Blooming Prairie football team in practice Monday. The fall sports season will kick off this week. Rocky Hulne/sports@austindailyherald.com

Hulne: The joy and pain of prep sports; There’s a lot to look forward to in the upcoming season

Every fall when I go through the various practices to work on the Herald Fall sports preview, I see a lot of hope and optimism among the coaches and athletes.

The attitude is upbeat and the energy is high.

Over the next nine months, the local prep sports scene will likely bring out various emotions from those athletes and coaches. There will be fist pumps of joy, tears of agony, and we may even see a team or two hoist a state championship trophy.

Through it all, I’m reminded why I still enjoy covering sports after more than a decade behind the sports desk. The two biggest things sports, especially at the prep level, bring to the table is unpredictably and wild emotions.

No matter what you think is going to happen before a season or a game, you can always be wrong. There’s nothing quite like the moment when a game comes down to a final play and the rush of momentum from the result immediately hits the sideline. A dramatic win will bring out the greatest of reactions from all players on the team and a crushing loss will bring out the most painful of responses.

While it’s never fun to interview an athlete after a tough loss, sometimes you can see in their eyes how badly they wanted to win and how hard they had worked to get to that point. You can’t help but respect that kind of dedication. I still remember when the Austin boys soccer team advanced to its first Minnesota Class A Boys State Soccer Tournament in 2009, losing a tough 2-1 game to Simley on a late goal.

After the loss, Austin grad Jacob Brehmer summed up the heartbreak about as well as any area athlete ever has.

“You know that feeling when something so good happens it doesn’t even hit you until later,” Brehmer said after that loss to Simley. “This is like the opposite of that. It’s so bad and I know it’s just going to keep getting worse because we were so close.” 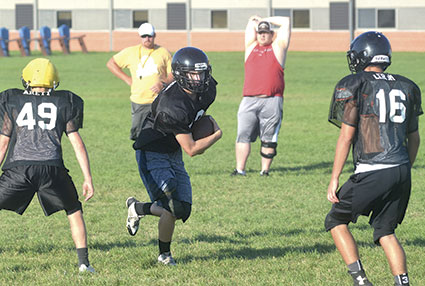 Seth Peterson carries the ball for the Blooming Prairie football team in practice.

When an athlete breaks through with a big win, most of their emotion is usually displayed right after the event while they are still on the field of play. When they have time to settle down, they’re usually still trying to figure out exactly what happened and they’re trying to get used to accepting the fact that they have just reached a major goal.

“This was a great meet and a great day. I’m so glad things went the way they did,” Fadness said on that day.

Emotions are magnified at state tournaments, but regular season contests can also bring out great emotions, depending on the outcome. Every time I go out and cover a game, I’m always prepared to watch that emotional outburst and it’s always an exciting moment. I think that’s what makes being a sports editor so fun and that’s why I keep coming back every year.

As we look forward to the 2016-2017 prep sports season, which begins this week, I’ll be looking forward to all the big moments and all of the great games in our area.

HAYFIELD — The Hayfield football team will look to a new leader this season and he’s hoping he can get the... read more