Hearing planned to look into claims of donation violations

ALBERT LEA — The Minnesota Campaign Finance and Public Disclosure Board has scheduled a probable cause hearing in connection with a March campaign donation involving two local DFLers.

The probable cause hearing is scheduled for Oct. 5, and is in connection with a complaint filed by the Minnesota Jobs Coalition, a center-right group, last week.

The complaint alleges that Gary Schindler — a candidate for District 27A — and Robin Brown — a Freeborn County DFL Party member and former District 27A representative — violated state statutes when he accepted a $2,896 donation from Brown’s business account March 13. 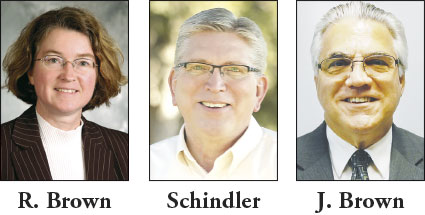 The Minnesota Jobs Coalition alleged in filing the complaint that Brown commingled funds from her business, Wedgewood Peruvian Pasos, when she presented Schindler with the check.

He said accepting the donation was done in good faith to be compliant with state statutes.

Schindler said the issue with the donation was that it was written with a check from Brown’s business account, noting that Joseph Brown, Robin Brown’s husband and treasurer of her election committee, has taken responsibility for the incident.

Schindler said he returned the donation within a few hours of learning that it was given with a check from her business account.

Minnesota Jobs Coalition president and chairman Kevin Magnuson said Tuesday the organization was pleased with the board will hear the case.

“The allegations which the board will discuss on Oct. 5 are very serious in nature,” Magnuson said. “Both Mr. Schindler and Ms. Brown, or their campaigns, have acknowledged the factual basis of the complaint in media reports — that they in fact made and received corporate contributions, misrepresented them on their respective campaign finance reports and that Ms. Brown co-mingles campaign funds with business funds. In spite of their efforts to minimize the serious nature of these violations, I am confident the board will make the appropriate determination in October.”

Last week he denied that his wife or Schindler willfully violated state statutes, and claimed the donation was leftover money from his wife’s unsuccessful 2010 re-election bid.

He claimed responsibility for the situation, and said he should have closed the campaign account immediately after his wife decided she was not going to run for election again in 2010 or 2011.

The Austin boys and girls cross country teams each had a sophomore runner finish in the top-10 as they opened... read more