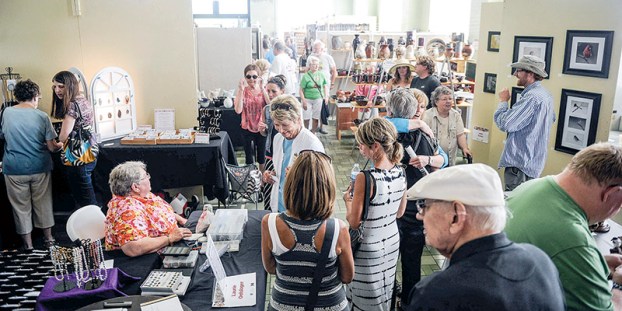 Fun for everyone: Artworks Festival returns for 5th year Aug. 27-28

Excitement in the air as the fifth annual ArtWorks Festival inches closer.

ArtWorks Festival co-chairs Bonnie Rietz and Belita Schindler are anxiously waiting for the opening day of this year’s festival, which begins at 9 a.m. Saturday, Aug. 27, and ends at 4 p.m. on Sunday, Aug. 28. The event will be held once again at the Historic Downtown Power Plant, 501 Fourth Ave. NE in Austin.

The Dick Schindler Celebration will return again this year as well and will be held inside at the Paramount Theatre. 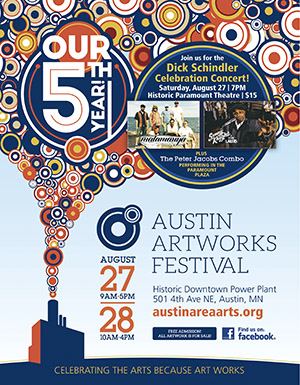 Get a full list of events through the guide now available.

“A highlight of this year’s ArtWorks Festival will be the Dick Schindler Celebration Concert,” Rietz said.

Organizers of this year’s event have arranged for several popular groups to perform for the Celebration Concert, including: Malamanya, Sonny Knight and the Lakers, and the Peter Jacobs Combo.

ArtWorks committee members Gretchen Ramlo and Mary Anne Wolesky said Malamanya and Sonny Knight and the Lakers are both well known in the Twin Cities area. They billed Malamanya as a high-energy band with musical styles from Cuba and Latin America.The other featured band, Sonny Knight and the Lakers, was described as a high-energy band that has gained wide popularity for strong performances.

“The concert will be held in the beautiful historic Paramount Theatre and during intermission, the local group, Peter Jacobs Combo will perform in the Paramount Plaza,” Rietz said.

“We are also excited to have the Austin Symphony Orchestra play at the festival on Saturday. This is the first time they have been a part of this event,” Ramlo added.

According to Rietz, there are several new happenings at the festival this year. A display entitled “Green Card Voices” will be on display in 20 downtown businesses, including the Austin ArtWorks Center, beginning Aug. 17 and in the Historic Downtown Power Plant throughout the festival.

“This is just one example of how we are extending the festival into the community,” Rietz said.

The display provides digital storytelling to share the stories of America’s immigrants. Festival organizers explained that “Green Card Voices” is a non-profit that started in 2013. The organization works to build an understanding between non-immigrants, immigrants and advocates from across the United States.

Ramlo and Wolesky said that the festival is a community effort with over 250 volunteers working to make the festival a success.

Ramlo believes many community members will be happy to know that ceramics artist Joseph Sand will be returning this year.

“He often sells out before the festival is over,” Ramlo said.

She also noted that another popular artist, Thomas Blahnik, who just received a prestigious award at the Uptown Art Fair in Minneapolis, will have his wood pieces at the festival.

Committee members are also grateful to have popular author Douglas Wood and photographer John Duren give a presentation about their collaborative effort of their newly released book, “The Essence of Place: The Story of the Jay C. Hormel Nature Center.”

Another opportunity for aspiring writers or anyone interested in how novels are created is a workshop with author Grant Blackwood. It will be held at the Austin Public Library from 9 a.m. to 5 p.m. on Thursday, Aug. 25.

Over the past five years, organizers have seen the festival grow greatly. This year there are 54 visual artists, 16 authors and 18 musical groups.

There are many activities for families to enjoy, including: Brush the Beetle, face painting, piñata making, mosaic art, hula hooping and bucket drumming. There are also Creation Stations where youngsters can use their creativity with woodworking, Legos, jewelry, dolls and flip-flops and flowers.

A variety of musical groups will perform throughout the festival and food vendors will be serving up food for attendees.

Rietz said those planning to attend the festival should map out their day and make sure they have time to see everything.

“It could also be a time to shop for the perfect gift,” she said

The week leading up to this event is also full of activities for the community to enjoy. A full schedule of the week’s events will be available to the public this week. Admission to the event is free.