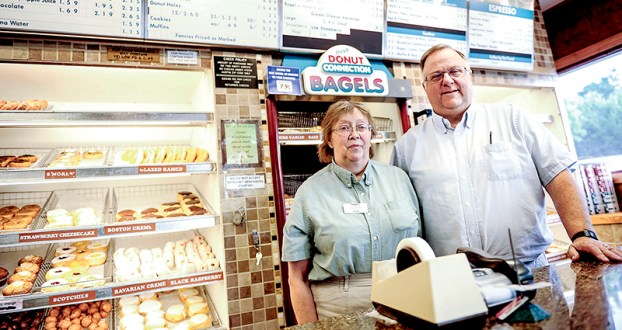 After more than 40 years, an Austin mainstay business will sell its final doughnut in about a week.

Dan and Janet Hooker will close Austin’s Donut Connection on Aug. 13 for the couple to retire, but the two have met with many faithful customers that are sad to see the Austin staple about to serve up its final confection.

The shop started as a Mr. Donut in 1976 before converting to a Dunkin’ Donuts in 1991 and becoming Donut Connection in 2005. But after 40 years and three months of business, the Hookers are ready to retire.

Dan, 64, has spent many years coming to shop to get things going around 2 a.m., and he often does deliveries and paperwork during the mornings. Janet often handles the front counter and comes in before 4:30 a.m.

Janet jokes the two are looking forward to staying up later and waking up later.

The couple tried selling the business as a doughnut shop, but a deal dissolved in May a few days before it was set to close. The two have since sold the building and equipment in a package to Florida-based restaurant owners. 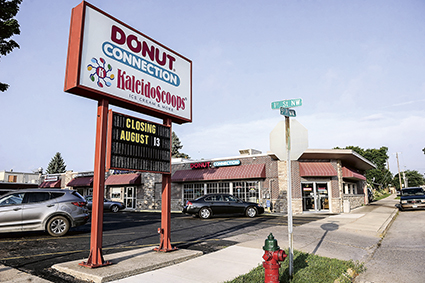 The Donut Connection will close next week after more than 40 years in various incarnations.

The shop has been at 507 First St. NW for its entire run.

Janet recalled some of the memories from their 40-plus years in business, including the Oct. 31, 1991, ice storm that knocked out power, but they were able to make some items using gas heat, including coffee with hot water and a pour-over coffee maker.

“We had a line of people out the front door to buy cups of coffee,” Janet said.

Janet also recalled the 1985 Hormel strike, when the shop had a rule that no one could talk about the strike in the shop, since they could have people from the union, corporate and the press in the shop at the same time.

“We said, ‘You can’t discuss the strike in here,’ and it worked,” Janet said.

The two also remember Austin being quite different than it is today. Along with a shopping center on North Main Street with a Kmart and, before that, Sears, Janet listed several other past businesses from that area, such as Coat-to-Coast Groceries, Tradehome Shoes and many more.

“We have seen a lot changes,” she said.

But the doughnut recipes have stayed the same over the years, and the shop makes 49 varieties, along with bagels and other goodies. However, few have left the shop and come home with the Hookers.

“We don’t take them home at all, except now when the grandkids are there, we bring home their favorites,” Janet said.

When Dan and Janet’s children were growing up, they’d occasionally bring them their favorite donuts home, but the couple preferred to leave work at work.

“It never came home, because we’re here seven days a week,” she said.

Their children have already been stopping by the store to pick up some last doughnuts to take to their coworkers.

“It’s all part of their lives,” Janet said. “They grew up here.”

The couple has three children — Jamie and twins Christopher and Carolyn — and five grandchildren.

“Our kids learned all the importance of hard work,” Janet said.

Hard work is a key to succeeding in a family-owned business like Donut Connection, Janet said, as is getting the help of family.

But Janet said their children agrees it’s time to say goodbye to the business.

“As they all say: Time for you to retire. They all say that,” she said. “And we might get to see them more.”

Carolyn has mixed emotions seeing the shop close. While she’s sad to see it go and sad for Austin, she’s happy for her parents to be able to retire and go out on a high note — and she’s happy they’ll be able spend more time for themselves and with their grandchildren.

“It’s wonderful for them,” she said.

Janet says the shop has been busy since they announced the closing, but she isn’t sure they’ll make any more doughnuts than usual because they’re running out their inventory, which is often bought in bulk for multiple weeks.

“You have to empty the inventory out, so, yes, we are running out of things,” she said.

The shop sold Baskin Robbins Ice Cream starting in 1995 before becoming KaleidaScoops. It also had Mill Street Sandwiches, but it stopped serving the items recently.

Janet and Dan say they’ll most miss the people they’ve met in the shop, from their regulars to people form out town.

“We’re going to miss you,” Janet said to their customers. “Thank you for your business over the years. We do appreciate it. That’s why we have succeeded — is because of our good customers.”

Austin’s Wal-Mart is celebrating a new look and more than a thousand new products. After a Friday ribbon cutting, the... read more