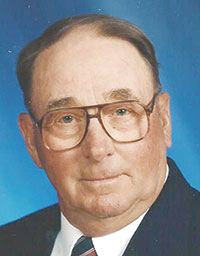 He married Elna Schwartz on Dec. 27, 1945, at Trinity Lutheran Church, Dexter, Minnesota. They were married 63 years. To this union they had two sons, Jerry and Larry. They farmed and lived in the Carpenter and Grafton area their entire married life.

Cal loved fishing, working with his horses, collecting tractors, going to auctions. On many occasions he and Elna would spend Friday nights at the Turp in Austin. They loved to polka and Waltz. They even won an award for their fine stepping. The grandchildren learned and listened to this “umpa” music anytime they rode with grandpa.

Cal was a former member of the Worth County Fair Board, Carpenter School Board, a 4-H leader for years, and the advisory board at Good Sam. He won several awards over the years including Master Pork Producer, dealer of the year from Golden Harvest Seed, outstanding young farmer, Hormel feed dealer award. He showed hogs at many hog shows at which he won several awards.

Schroeder & Sites Funeral Home can be reached at 641-713-4920 and online condolences may be left at www.schroederandsites.com.