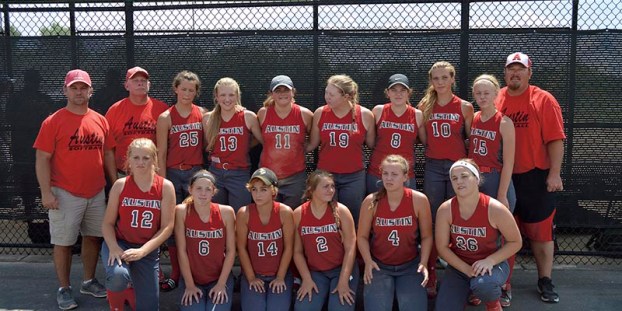 The Austin 14U softball team recently completed one of the better runs by any Austin summer softball team in recent years. Austin dominated in the regular season and it competed in the Northern Nationals 14U softball tournament in the Twin Cities, where it won its first two games and played in the Gold Bracket, which featured the top 22 teams out of the 86 teams from all around the Midwest.

While Austin took a couple of losses against some tough traveling teams at nationals, the squad wasn’t feeling let down or defeated. It was feeling motivated.

“Once we got up there, we finally saw what we’ve been working towards,” said Austin’s Jordyn McCormack. “It was pretty crazy. Getting this far will motivate us to get even farther the next year.” 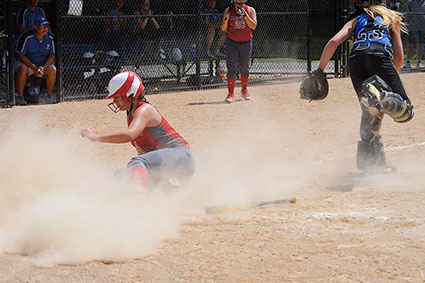 Austin went 33-7 overall this summer, it went 31-4 in the regular season and it finished 22-2 in league play. Playing in the national tournament against tough competition was the perfect ending for an Austin team that learned a lot about the game this summer.

“It was a phenomenal, eye opening experience for us,” Austin head coach Will Pazurek said. “There were a lot of memories made. I couldn’t believe how well the girls played in their first three games. It was unreal. They’re a very competitive group, they play together really well and they support each other. It’s just a fun group and it’s the best year I’ve had coaching.”

Since no Austin softball team had ever played in any type of national tournament in recent years, the squad wasn’t exactly sure about what to expect. Pazurek said he kind of had to figure out as it went along, but Austin’s team wasn’t feeling overwhelmed.

“I think we were all really pumped and nervous going into it,” Austin’s Elora Hughes said. “We played really hard during the season, so we had that goal to get into the gold bracket.” 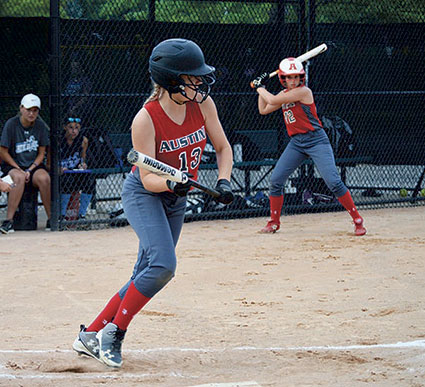 Destiny Gray sets up to lay down a bunt for the Austin 14U softball team. Photo Provided

While some teams would be content in winning a lot of contests by a lot runs, Austin was looking forward to some tough games. The team didn’t mind taking a few losses if it meant that it could play in some more competitive contests.

“There was a lot more competition at nationals and it made the fun,” Austin’s Destiny Gray said. “Whenever you’re just crushing a team, it’s not really that fun. You’re just kind of there.”

Austin was able to stay consistent this summer by playing strong defense and hitting the ball well. Pazurek said he pushed the team to learn how to play small ball by bunting and running the bases hard.

Austin also made strides as a group and gained camaraderie throughout the season.

“It was really fun. I think we got closer and we made a lot of friends,” Zoe Dolan-Peterson said.

Pazurek and the team thanked the community for supporting funds for their trip to nationals as they considered it a golden opportunity. Austin made its mark amongst the best 14U teams in the Midwest at nationals and the group is hoping that success continues as they go further in their softball careers.

“Once we started playing games we finally saw we were really good team with a lot of potential,” Katelyn Murphy said. “We know what we can do and we can build a whole team and get along.”

The high point of the summer is nearly here as the Mower County Fair is set to run Tuesday through... read more