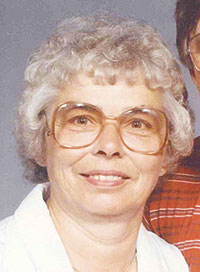 Alvina was born Sept. 25, 1928, to George and Mary Pagenkopf in Austin. She grew up in Austin and graduated from Pacelli High School.

In 1951 she married Robert Heil and together they had two children. They later divorced in 1957. She married Delmar Stuhr in 1972 and they resided on a farm outside of Austin. Alvina worked at the Austin Medical Building as a medical secretary, and also the Beer Depot and later at Family Dollar before retiring.

Alvina enjoyed gardening and had a large garden on the farm. She was an avid sports fan and loved the Vikings and Twins. Alvina was a member of St. Augustine Catholic Church.

She is preceded in death by her parents; husband, Delmar; two grandsons, Steven and John; three brothers, Thomas, Donald, and George.