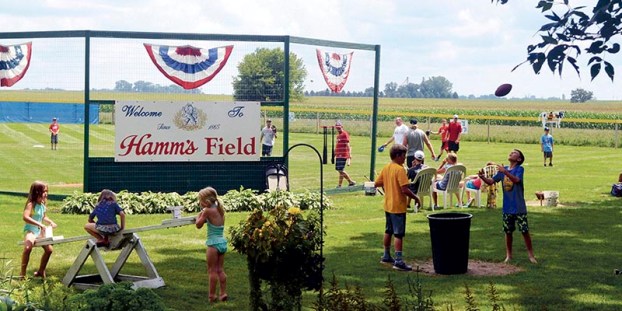 Hamm’s Field near Lyle is a place where kids and adults alike can come out and enjoy a friendly game of softball. Rocky Hulne/sports@austindailyherald.com

A great place to play ball: Lyle field brings back tradition of softball on the farm

LYLE — When Gary Meyer built a home on his grandpa’s farm land about a mile from Lyle back in the 1970’s he uncovered something that would help him bring back a family tradition that had laid stagnant for nearly 40 years.

That discovery was a small rock that was buried in the middle of a cow pasture behind his house and Gary’s neighbor informed him that that rock used to be home plate for baseball games. Sure enough, Gary’s grandpa and the Nevada township baseball team had used that pasture space for their home field for nearly a decade back in the 1930s. 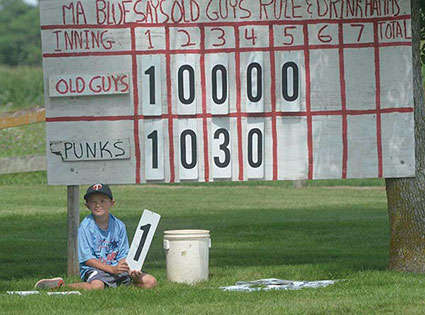 “My neighbor came over, he took a knife out and he dug out the old home plate,” Gary said. “Then we started playing back there with a softball. We just sat out there and played in the cow pies back in the 70s. It was a lot of fun.” 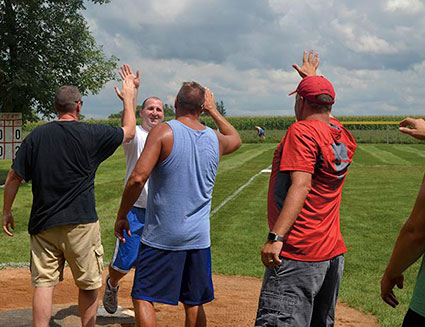 Ryan Retterath is greeted by his teammates after he hit a home run for the ‘Old Guys’ at Hamm’s Field in Lyle. Rocky Hulne/sports@austindailyherald.com

The series is played in a best-of-five format and last week’s game had plenty of variety — including players from ages 10 to 64.

Gary’s sons Chans, who lives in Rose Creek, and Brock, who lives in Lyle and coaches the Lyle-Pacelli baseball team, have played on the field for 20 years and now they bring their children to the annual game.

“Baseball has always been huge since we were little and our dad is into baseball. Now our kids enjoy it and they’re playing all of the time,” Chans said. “Sometimes they’re on the playstation a little too often, so it’s nice to come out to grandma and grandpas.”

Three years ago the field went under a major overhaul and now it looks more like an actual baseball field instead of a farm pasture. There are fences, pole markers, retired numbers from veteran players, and even an old-time scoreboard that is run by one of the local kids. 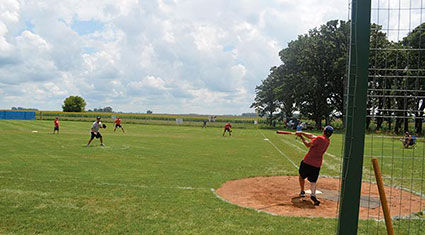 The Meyer farm has hosted baseball and softball games since the 1930s. Rocky Hulne/sports@austindailyherald.com

The field was re-named Hamm’s Field once it was built up because Hamm’s is the beer that Gary and the Lyle Liquor Blues used to drink after their softball games.

Brock enjoys the field so much that he brought his All-Stars team out to play there this summer and he also holds the LP baseball team banquet at Hamm’s Field every summer.

“It’s a good field for [the All-Stars] age. They’re not to the point where they can hit it out of the park every time. We played here all of the time when we were younger and we even used to play football out here,” Brock said. “We always say it’s open to anyone who wants to come out and play and use it.” 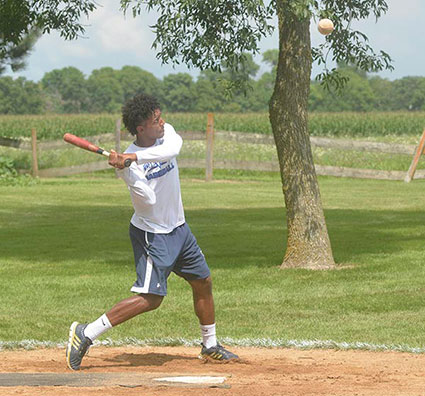 Ricky Marinez takes a swing at Hamm’s field on the Meyer farm near Lyle. Rocky Hulne/sports@austindailyherald.com

When Gary hosts the annual Old Guys vs. Punks game, he’s happy to see family and friends alike from the Lyle area out there having a blast and playing a fun game of softball.

He also likes the new look of Hamm’s field which gives the game a more ‘Big League’ feel.

“It got bigger and bigger. We all pitched in and it took a couple of weeks,” Gary said. 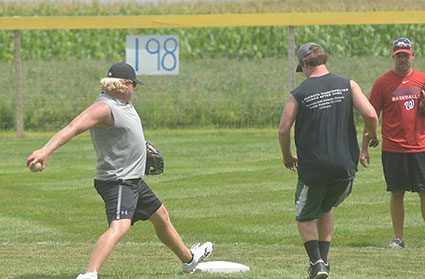 Brock Meyer tags second base to get an out as his brother Chans looks on. Rocky Hulne/sports@austindailyherald.com

The Austin Greyhounds have turned on the switch and now they’ll find themselves two wins from the state tournament when... read more